At the beginning of beta shift, a call was sent out for a briefing in the promenade conference room for a search and rescue mission. I responded to this briefing and found myself accompanied by, Lt. Eunha, Sublt. Andria, LCDR T'Rara, and Centurion Roris. Fleet Captain Perim came in and gave us the briefing. The Eridanus Transit & Shipping Co contacted DS13 for assistance in finding two of their freighters. Having dealt with them in the past FCPT Perim placed me in charge of the rescue operation.

I sent in a request to Eridanus for more information on these freighters and was given the following information. When asked about why they may be getting targeted they answered only with the fact that they are one of the largest shipping companies in the quadrant and it may be competition.

Having the knowledge of where the freighters went missing we set course and departed DS13. While in flight Andria deduced a likely search zone to begin our efforts. You can find that below.
Spoiler: Show
Orange marks debris fields
Red are ion trails that Andria highlighted that lead to debris fields
Green were various other ion trails. 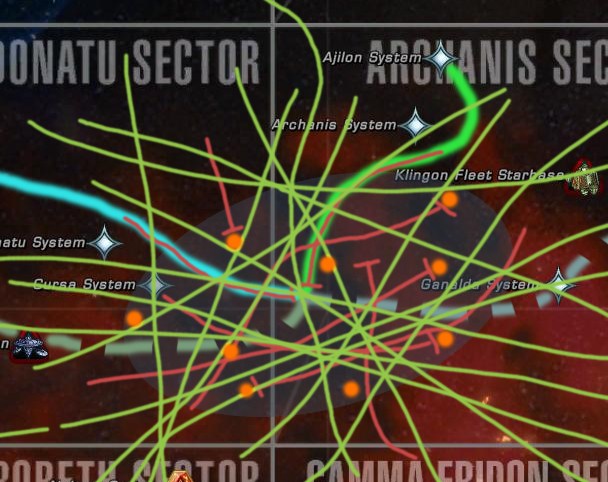 The Vanguard maneuvered itself to the closest debris field of the intersecting flight plans. We found the debris field there to be comprised largely of tritanium. There were no lifesigns or biomatter. It was ruled that this was the first freighter, the RRW Haros.
After some time of investigation the Haros debris field presented no signs of life and nothing on sensors there was a discussion as to where we go next.

There was a decision to cut power and attempt to mask our energy signature as close as possible to that of a Norkova class vessel. It was an attempt to guise out the attacker. Though it was suggested by another I ordered it and it created a small debate as to if it was the appropriate move. All nonessential systems were temporarily brought down in the attempt.

With nothing to come of it I ordered all systems to come back online and probes to be deployed to all other debris fields, while waiting for the information to come back we began transit following the only ion trail leading out of the area into the Kassae Sector.
Spoiler: Show 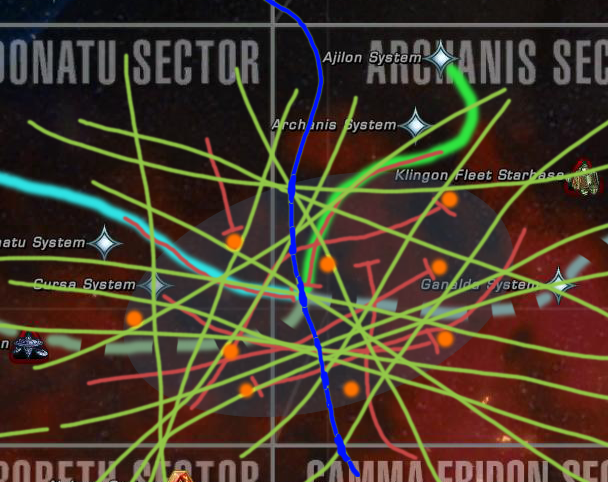 This trail was found by T'Rara to lead to the Cernan system, where only one planet Cernan II was only barely hospitable. Scans of the planet were made where we found 82 humanoids lifesigns and 1 nonhuman. The Counselor Eunha said she felt an emotional feeling between these the nonhuman and the group. So after readying the cargo-hold on deck six to act as a quarantine and triage area we received 82 humanoids and 1 Earth poodle.

With the survivors aboard, Lt. Eunha was sent to see to them while we attempted to continue to follow the ion trail. It lead from Cernan II back through the Donatu Sector and we lost track of it within the Aldebaran. With nothing more to go on we returned back to DS13.

When Lt. Eunha returned to the bridge she had given nearly identical information that had previously been gathered. The crew had been performing their duties when their sensors went down and they were under attack. They were unable to get any good look at their attackers.


//TL;DR We found the survivors again, but the ships were destroyed.
6 Likes