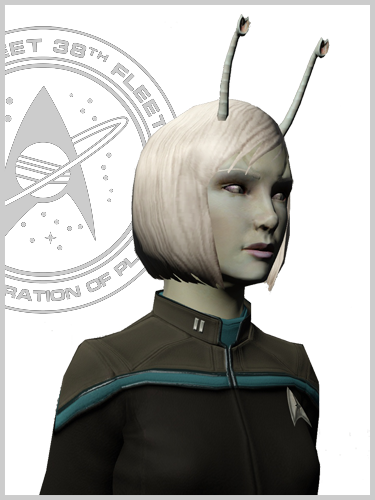 BIO
Eshrela is a very curious Aenar. She longed to leave her frozen home despite the lack of support of friends and family who did not feel she would do well leaving the underground city. Despite this she went ahead at the age of 18 and joined Starfleet, she faced hardships due to her blindness in the career she has chosen but her reliance on her hearing allowed her to overcome these disadvantages and graduate from starfleet academy 4 years after joining.

Notes:Due to her blindness she relies on her telepathy and her senses of sound and touch to allow her to move around safely and also complete her tasks. Only uses her telepathic abilities when given permission by others.

Notes: Subject blindness is normal to her species. Sometimes can cause few bumps and bruises when she is not completely aware of her surroundings.

Notes: Subject expresses disappointment in sometimes being given 'special treatment' by fellow officers due to her being blind.