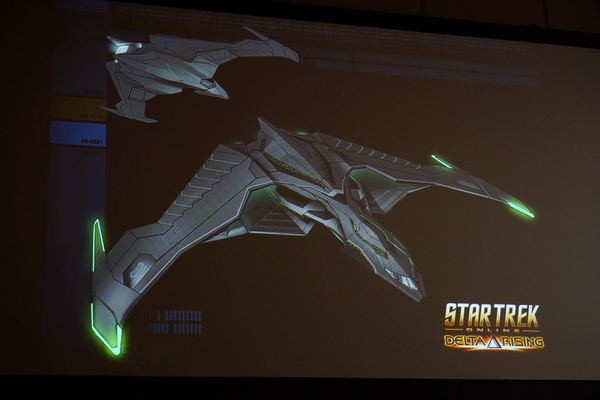 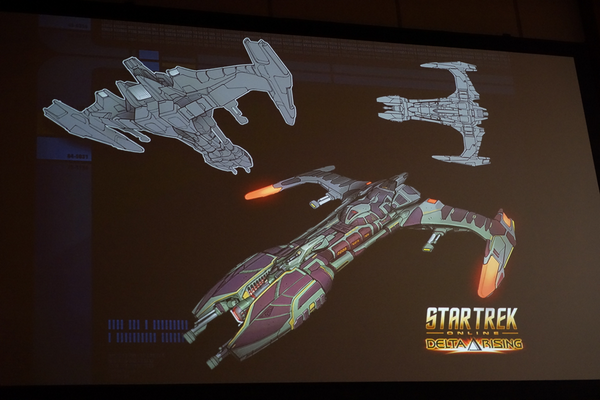 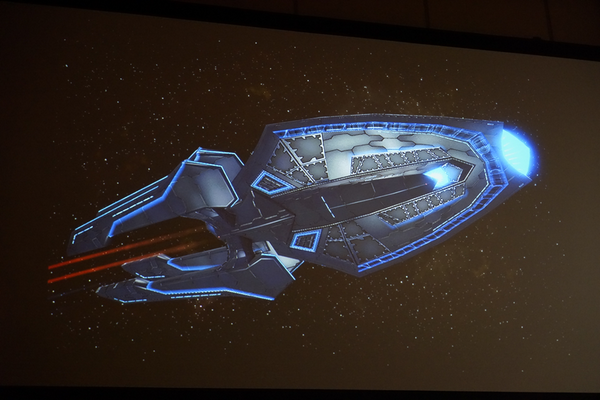 S-Hauen_Jarok August 3, 2014, 12:00am #3
That Starfleet ship looks like a Prometheus but with a ton of sharp edges. With all three ships, looks like they're moving away from curves and giving the ships more edges and corners.

Although unlikely, it would be nice if they introduced new playable species. Like Hirogen for the Romulans, Klingons could get the Kazon and the Federation...Neelix ha ha ha...!
LobsterEater August 3, 2014, 12:00am #4
Where's my Typhoon Class D:

Though I must admit, my main attention isn't even on the ships, was a comment about how an Open Jacket version of the Odyssey Dress along with other variations of the uniform in general would be brought up. I can't say I'm personally too fond of the look concerning the new Federation's class of ship, but, no doubt once there are more images and some other looks of it, I'll come to accept it. I mean... The Klingon and Romulan ships look like ... well... a Klingon and Romulan ship, just in my opinion the one us FED's are getting from that image, looks a little too much of a step forward from what I'm used too. Though, I really hated the Dyson Destroyer, so.
S-Hauen_Jarok August 3, 2014, 12:00am #5
More ship pics and some characters
Kozath_ August 3, 2014, 12:00am #6
That New Romuan Ship is yummy! The Fed ship on the other hand...does not look Fed. Another alien race, but not Fed.
Dactylus_ August 3, 2014, 12:00am #7
Fed ship looks more tholian to me, I want the dauntless class D:
omn August 3, 2014, 12:00am #8
Though, I don't actually see anything in that picture (or anywhere else) that confirms that this is a federation ship. Sure, it was with the other images when I found them, but it has nothing in common with the other two. For one, it's a 3D rendering whereas the other two are clearly concept art.
Razor_ August 3, 2014, 12:00am #9
It's got blue lights. Blue = Federation.
Rellir August 3, 2014, 12:00am #10
I'm just glad I read a thread where one of the devs promised that our Tier 5 ships would be able to be upgraded and still be competitive. I see nothing in those pictures that makes me want to abandon my Sovereign, Bird of Prey or T'Varo.

New story on the other hand ... that I'm looking forward to.
Captain-Dewey_ August 3, 2014, 12:00am #11
I get the feeling that upgrading existing tier 5 ships will require max crafting and a modest amount of DIL/zen.
Looking forward to a new story. I kind of hope it has absolutely nothing to do with the iconians or the sphere. I'm in favor of pretending that story didn't happen.
As for the looks of these ships. Meh. At least 2 out 3 look right for their faction as opposed to 0 out of 3 like the dyson ships.
Glad there will be a new interior but I hope they give romulans at least some new bridges and it'd be nice to have a different, doesn't even have to be all the great, interrior for the KDF.
2 Likes
Kozath_ August 3, 2014, 12:00am #12

Captain Dewey
wrote:
Glad there will be a new interior but I hope they give romulans at least some new bridges and it'd be nice to have a different, doesn't even have to be all the great, interrior for the KDF.
This x1000
omn August 4, 2014, 12:00am #13
Ya' can't escape the Iconians, Dewey. They're pretty much central to the entire game's plot. Also: I'm willing to bet the Sphere will be pretty important to getting into the Delta Quadrant.
1 Like
Drexia_ August 4, 2014, 12:00am #14
Myself i only hope that my ships wont go and become second less competitive due to the t6 stuff. Something like that would probably make me stop buying anything in STO, or just leave altogether for being screwed over.
2 Likes
Davin August 4, 2014, 12:00am #15
Yeah, it does seem a bit harmful to the endgame store when you suddenly decide 'the end game should be 10 levels higher and oh yeah that stuff you spent actual money on might not actually be worth it anymore kthxbai'.

I'm hoping the store/lockbox T5 gear 'upgrade' will put it in line with the T6 stuff star wise, just without whatever shiny new abilities they insist on giving to the new ships.

Edit: I've also heard whispers of multiple new Fed ships, not just that... thing. That said, I REALLY want that warbird. >_>
Kell-Tanis_ August 4, 2014, 12:00am #16
I hate that they're including the Ocampa and somewhat disappointed about the Talaxians. There are so many other prominent races that still need to be represented and instead they focus on the most galactically insignificant. Honestly, at this point they should almost just change the name of the game to Star Trek: Voyager Online.

The other stuff I'm more excited for though.
Kozath_ August 4, 2014, 12:00am #17
Yeah. Ocampa and Talaxians. Meh. Add more stuff to the normal alien character creator, then you can create Ocampa and Talaxians.
Aurelia-tVeras_ August 4, 2014, 12:00am #18
The Federation ship looks like one of those things you take to a picnic to pop off beer-bottle caps. But the design is in line with the slightly more militaristic, utilitarian thing Starfleet has going on these days, so at least it's consistent.