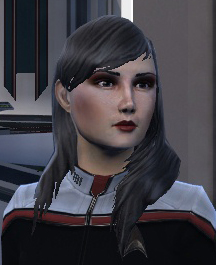 Gabrielle Mailliard was born, raised and educated on Earth, around Saint-Emilion in southern France. Her family are wine-makers by tradition, however Gabrielle's mother Jacquelynne bucked this trend leaving the wine to her older brother and became an administrator for local government. She met Gabrielle's father Marlon at work and both are still working there to this day. The family are not particularly tied with Starfleet in any way and Gabrielle had little experience of life outside France until her late teens.

When Gabrielle was fifteen she, her father, mother and younger sister Noelle went on a family holiday to the USA to celebrate her mother's promotion. Whilst staying in New York they were invited by one of Jacquelynne's government contacts to attend a zero-gravity combat match. At a gathering after the match the contact's son took a shine to Gabrielle and invited her to try a zero-G combat suit, which she did. The son didn't hold much interest for the young Gabrielle but the zero-G combat experience stayed with her and once back in France she started to research the sport. By the age of Eighteen Gabrielle was the under eighteen champion in unarmed zero-G combat for France, her height, strong build and solid legs giving her a good frame from which to fight. Gabrielle was approached by a Starfleet recruiter who asked her to consider joining them and competing in the zero-G combat team for Starfleet. With little else to aim for and her eyes open to the infinite possibilities of space Gabrielle agreed. She continued her fighting throughout the academy, qualifying as a space-walk and zero-G combat instructor in her fourth year, 2399. She also showed good potential as a tactician and commander and was fast-tracked to positions of responsibility in her first two postings, in which she excelled.

In 2409 as a Lieutenant Commander and second officer of the Defiant class U.S.S. Furious Gabrielle was forced to take command of the ship behind enemy lines after the Captain and first officer were killed. With the bridge open to space and multiple hull-breaches all command functions had to be re-routed to Engineering, involving accessing the ailing computer in damaged areas of the ship. Gabrielle completed a space-walk in record time, re-routing the damaged systems and bringing the navigation computer and main deflector back online. The ship was able to limp back to Federation space with no further loss of life and Gabrielle received an award for her courage and leadership and an immediate promotion to Commander. She became executive officer on a Vigilant class ship, also running reconnaissance missions under cloak. Three years later in 2412 Gabrielle was promoted again, having been effectively commanding for four months while her Captain was consulting with another task force. Gabrielle was installed as Captain of the Gallant class U.S.S. Relentless and continues to run deep-stealth missions into occupied enemy territory, performing to the high standard expected of her throughout her career.

Gabrielle is 5.8" tall and while she has little time for combat training retains the physique acquired in her zero-G training, with strong fit arms and shoulders and muscular legs, albeit not in the good shape they used to be. Her long black hair has a few noticeable greys and can be found worn in a variety of styles. Her eyes are a very dark piercing brown and she often wears a dark red lipstick, a shade or two lighter than her red command uniform. She is feminine but not dainty and exudes confidence and exuberance, enjoying a good joke with anyone, especially if they will sit and have a drink with her. Captain Mailliard is liked and respected by her whole crew and she constantly receives praise from them for her focus on morale and well-being on their long missions under cloak.
2 Likes
m00nangel_ December 29, 2015, 12:00am #2
Bump for updates