Holodeck Short Stories
Dae October 23, 2015, 12:00am #1
Shan stepped into the large biodome, taking the control PADD from the administrator of the complex. His three youngest children that had accompanied him on the trip ran ahead and started bouncing about the lush green grass.

The administrator and the administrator looked at each other a moment. Grailiens look so similar to other species that most anticipate they must know each other, if not be related. Sadly, this was not the case, and Shan had never met Kouf in person, though he had talked to her several times over the last five months via comms.

"It is all ready to go." Kouf spoke as quickly and pointed as Shan. "I preprogrammed the climitization configuration. " She pointed at the PADD's screen. "Press the 'Jal'Shan-1' program."

Shan glanced at the screen momentarily, then nodded looking back at Kouf. "I understand the instructions. We will be here between 1.4 and 2.1 standard hours."

Kouf started to step away, then paused, turning back towards Shan. "You have been in Starfleet for 7.4 standard years."

Shan's face tensed, slightly. "I am attempting to purse my lips, the accepted response I have encountered 43.9% of the time within Starfleet cultures. You are welcome."

Their exchange complete, the two adult Grailiens parted ways, and Shan joined his children on the grassy knoll, overlooking the fake Risian lake. the biodome was several kilometers in radius, situated on an otherwise arid desert plan of the the Grailien home planet of Takenum.

Designed as both a research center, and a zoo-like display of other worlds, the last five months had seen crews installing a new weather regulation generator, a gift from Jal'Shan, who had received it as a gift, himself.

After several minutes of playing, the young children gathered around their father.

Shan raised the PADD. "Are you all ready?"

Shan clicked the button titled "Jal'Shan-1" and slowly a series of dark clouds built in the far end of the biodome. Takenum was shrouded in a thick cloud layer all the time and as such, no direct sunlight from its parent star got through. But the upper level of the biodome replicated the shine of a sun, and the clouds built around it, as rain started to condense and fall on the far side of the dome.

Shan watched as a clouds settled in, and the distant fake sun became slightly covered. Then, as if growing from one side to the other, the small arc of a rainbow slid across the sky.

All three kids 'oooh-ed' at the site. Bob pointed a finger and squinted as he watched its colors become more vibrant as the fake suns light refracted through the falling rain. "Dat's it father?"

His next youngest stared up at it. "What do they call it on Risa, again? I forgot."

Bob turned back towards his father with a slightly concerned and confused look on his face. "What do dey call i' here, father?"

Shan startled a moment, his head twitching from side to side as he considered the question. He relaxed again as he looked up, having an answer. "Here they call it a... Neema."

The kids ooh-ed and aah-ed again. Bob squinted at the beautiful refracting light. "A Neeeeeeeeeee-maaaaaa." 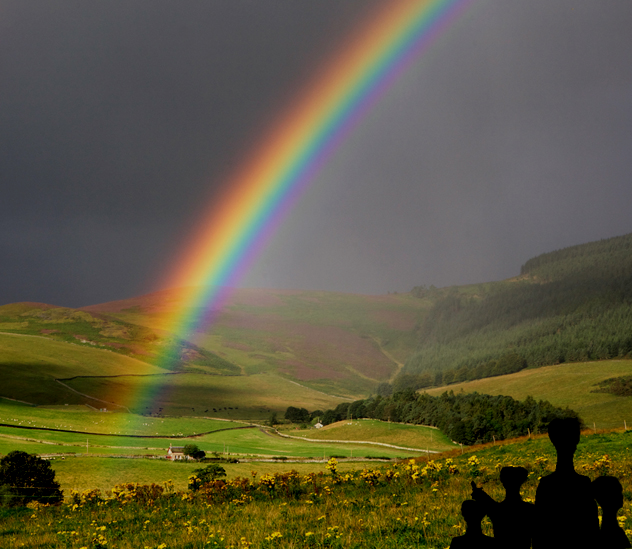