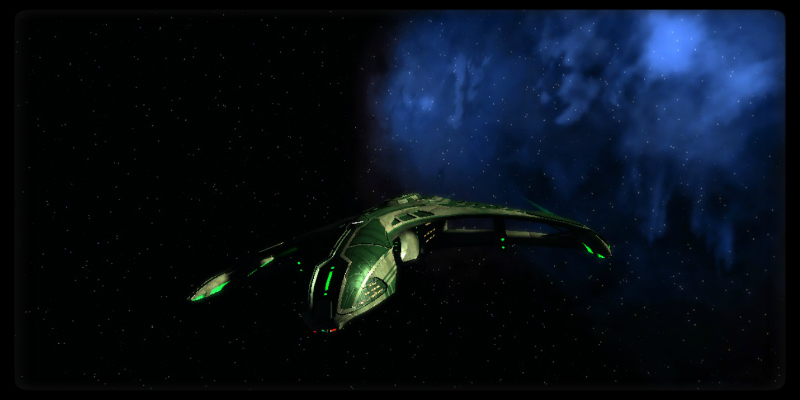 //Crew Compliment
Minimum/ Skeleton Crew: 50-100
Crew: 305 Officers & Crewmen
Maximum Passengers/ Evacuees: Est. at 2432
Sleeping Quarters: For 370
Consumables: 13 months; 15 if rationed (note: This is based on an average which does not include extended missions of multiple years) 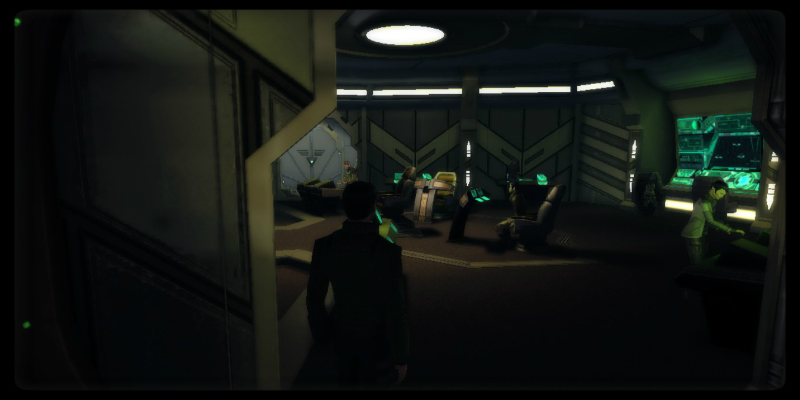 Located at the top of the primary hull and often referred to as the brains behind the operation, the Main Bridge is the spearhead of all things command related. The bridge is a highly restricted area with limited access; there are only two turbolifts that handle direct transit to the bridge, with officers of the watch stationed at key locations twenty-four-seven. Only authorised personnel are allowed to be present, unless the commanding officer or a senior officer gives temporary permission.

The configuration is of a new design from the Romulan Republic's brightest Engineers. The Republic's Ar'Kif now allows for a wider range of mission parameters to be completed by the Warbird. Alongside this, the bridge provides primary operational control, directly supervises all Away Team missions and coordinates all departmental activities. The layout of the Ar'Kif bridge is as followed:

The central area and heart of the Main Bridge provides seating and information displays for the Captain and, behind her/him, two other officers. The Captain’s Chair is raised from the rest of the Bridge Officers, to that of the Surrounding level which includes Tactical and Operations. The two Officer seats are equipped with fully programmable consoles for a variety of uses. All relative ship information (such as damage, power distribution, etc.) can be displayed with relative ease and quickly relayed to the Captain.

Directly fore of the command area is the Flight Control Officer/ Helmsman, who faces the main viewer. The Helmsman is equipped with a console and the responsibilities of controlling Impulse power levels, Shuttle Flight Co-ordination and any inbound/ outbound traffic. Sitting alongside the FCO is the Operations manager. Identical in size and design to the FCO console, the Operations manager is located closer to the Communications Officer rather than closer to the back of the bridge, where the Engineering Officer is located.

At the very front of the bridge chamber is a large viewscreen. This main viewer performs all the standard duties expected of it. This viewscreen is almost always active, whether it's displaying reports, what's directly ahead or acting as a visual representation of whatever the Captain desires.

To the Captain's right is the Ready Room.

Against the back of the main bridge are the consoles for Science and Engineering. Both types are programmable for a multitude of functions. There are two Science displays, first with Science I being a fully programmable multi-mission console. Science I has priority links to Conn, Ops, Computers, and Tactical and is also the primary science console.

Science II is the ASO's (Assistant Science Officer's) console, which can be used by any personnel. Science II has access to all science, navigational, sensor, and communications systems which information can be quickly transmitted to the Conn as it can be configured to operate in tandem with Science I. However, security links and all other non-science data is withheld from Science II. Science II more often works independently to Science I.

The Engineering consoles displays all engineering-relevant data and can show warp fields and engine output when required. This console also has priority links to the computers, the WPS (Warp Propulsion System), the IPS (Impulse Propulsion System), navigation, SIF, and IDF. Although usually unattended, the Engineering Department Head can bring this console to full Enable mode by entering voice codes and undergoing a retinal scan. Directly aft of this console is the Engineering II console, which is fully programmable to run any Secondary Console function, including Sciences, Medical, Operations, limited Helm control, or Security. 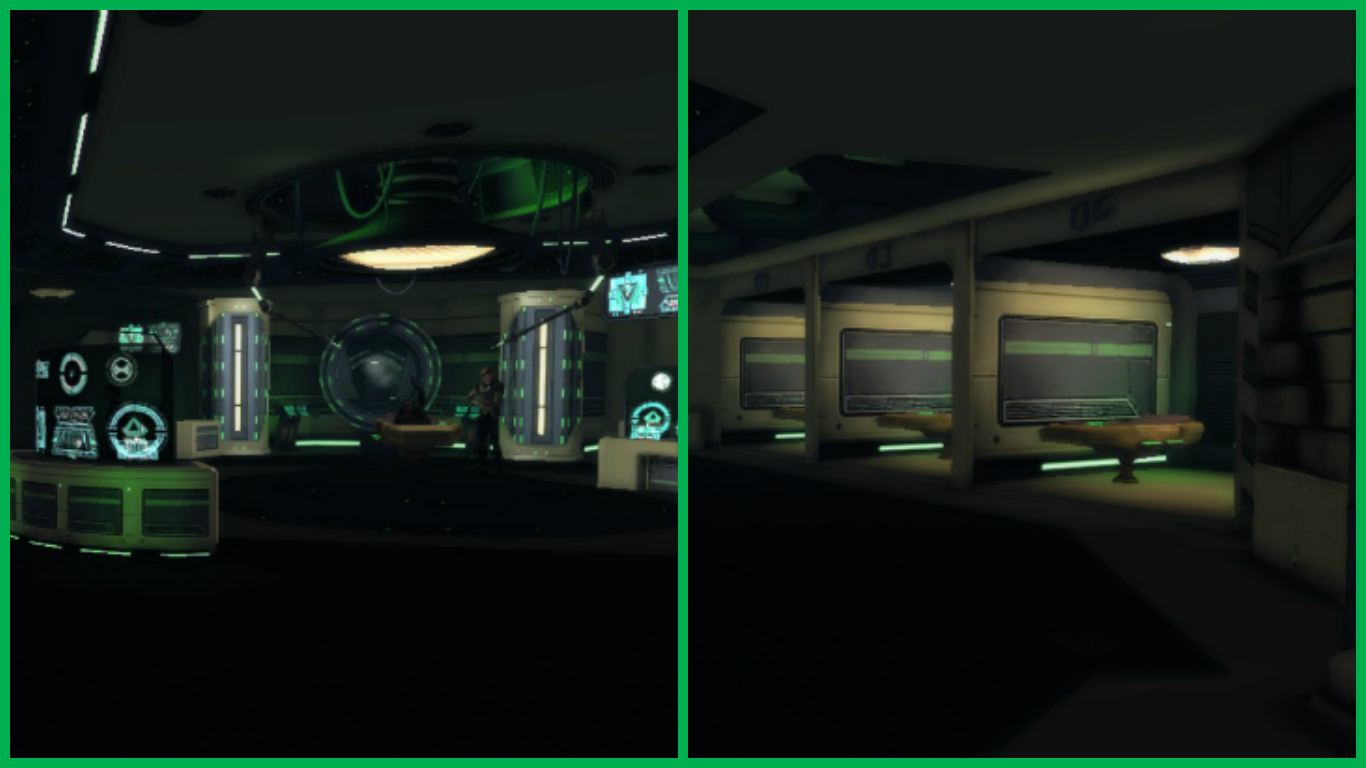 As well as both facilities, the Ship's Counselor has their office located on Deck 4, above the Medical deck. It consists of their private office, with standard furnishings (decorated to the Counselors preference), personal viewscreen, a computer display, and stock replicator. An individual therapy room furnished with chairs and couch for one on one sessions, as well as a large, group therapy room, consisting of several couches and chairs, are located adjacent to the Counselor's office. The therapy room is often redecorated to co-align with the preferences of patients.

In the event of a member of the crew suffering a psychotic episode, and needing to be isolated from the rest of their crew, the ill crew member is kept in sickbay, in the isolation unit, or in the intensive care units, as determined by bed availability and the Counselor on duty. 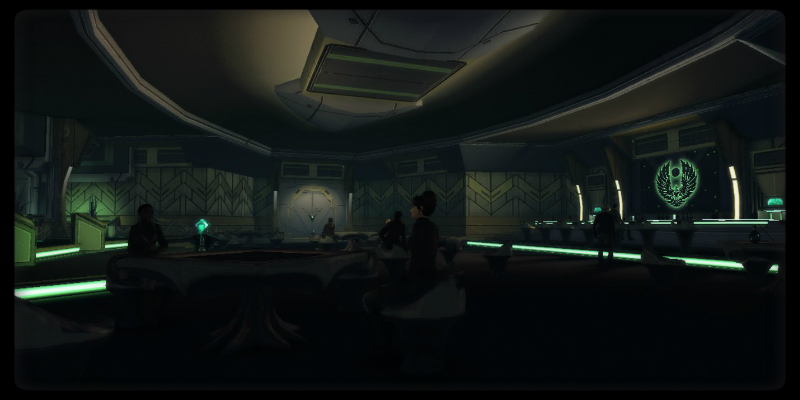 Standard Living Quarters are provided for both Romulan Republic NCO's and Ereins (equivalent to a Starfleet Ensign) alike. These persons may be expected to share their room with another crewmate in a dormitory like fashion, due to space restrictions aboard the starship. After ten months, members of the crew are permitted to bring family aboard the ship and a slightly larger room is allocated to them.

Two NCO's or two Ereins are assigned to a suite. Accommodations include 2 bedrooms with standard beds, connected by a living/ work area. A washroom with ultrasonic shower is located off of each bedroom. A food replicator, etc. Small pets are allowed to NCO's.

Enlisted members of the crew share quarters with up to 4 others. Accommodations include 2 bedrooms with twin beds, in very similar conditions.

Crewmen can request that their living quarters be combined to create a single larger dwelling.

Republic personnel from the rank of erei'Arrain up to Riov are given one set of quarters to themselves. In addition, department heads and their assistants are granted such privileges as well, in an effort to provide a private environment to perform off-duty work. Also after ten months, officers are permitted to bring family aboard the ship and a slightly larger room is allocated to them. Members of the Captain's Senior Staff (e.g. Department Heads) can have these restrictions waved with the Captain's permission.

There are a large variety of recreational facilities within the crew deck including, but not limited to: two standard holodeck facilities on deck 7, along with various individual holo-suites; a gymnasium and weight room with available equipment; a rifle range, on deck 8 and a shared lounge on deck 9.

This is a rather large lounge with a relaxed atmosphere. Everyone is on an equal footing and ranks are often dropped in favour of friendly conversation, banter or sharing of opinions. It has a stockload of recreational activies such as competitve games and, of course, ale. The lounge is the social center of the ship and where many members of the crew disappear to once their duties are finished. 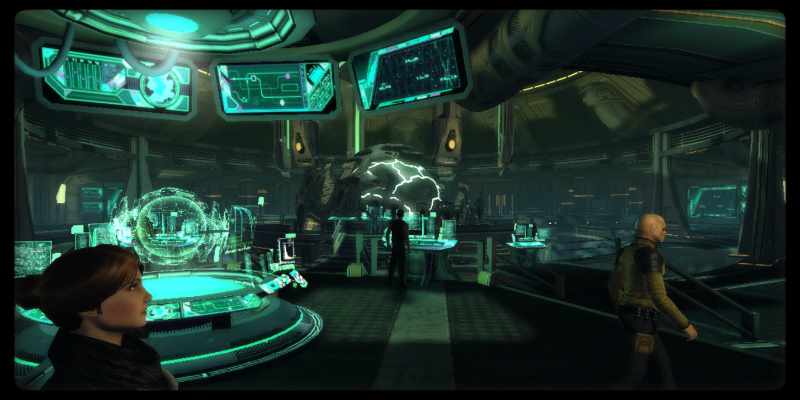 Main Engineering has access to almost all systems aboard the starship, and manages repairs, power flow, and general maintenance.

Entrance to the primary engineering spaces is provided by two large blast doors, a pair each on decks 10, 11, and 12, that can be closed in cased for internal or external security reasons, as well as in case of emergencies.

Just inside of the doors on deck 11 - Main Engineering - is an observation area where technicians monitor various systems of the ship. Also in that area, is a floor-mounted situational display similar to the rear consoles found on the Bridge. The ranking Engineer on duty can use the display to more easily get a broad view of the situation with just a glance.

Farther in from observation area is the singularity core and main control systems. Circular in shape the room is exceedingly functional to save space inside the ship. Usable consoles are mounted on every piece of almost every wall around the circumference of the room and provide primary control access for the engineers and technicians. Additionally, there are numerous ladders and access panels to maintenance tubes/ access tunnels, leading throughout the starship. The technical complexity of the starship dictates the use of these spaces to maintain peak efficiency and affect proper repairs.

Off to the starboard side of Main Engineering is the Department Head's office, which is equipped with a diagnostics table, assembly and repair equipment, a small replicator, and a personal use console with built-in private viewscreen. 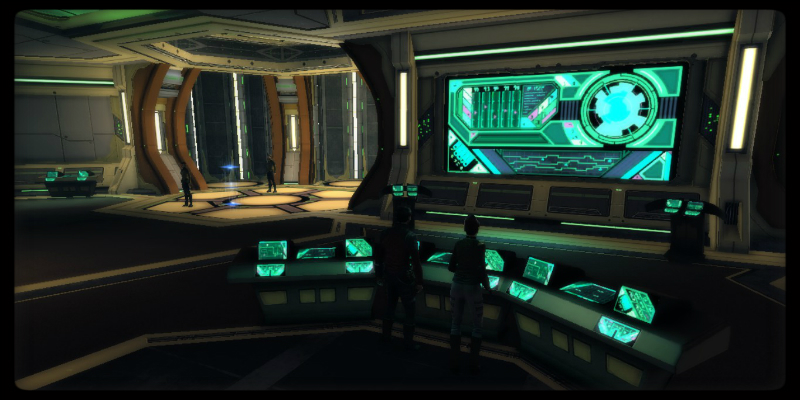 The Ar'Kif's transporter rooms are similarly designed to that of a D'DERIDEX-CLASS WARBIRD with only a few technological advances. Most notably, there is a fourth emergency transporter and the beam out rate for both emergency and personnel transporters has increased two-fold.

The transporter rooms are managed by a Transporter Chief who assigns officers to handle delivers of people or objects. During space travel, the transporters are almost never used with the exception of Away Teams and supply drops/ pick ups. The most frequent use of transporter systems is during NCO/ Officer shore-leave, Refit/ Drydock Maintenance and Diplomatic Missions. 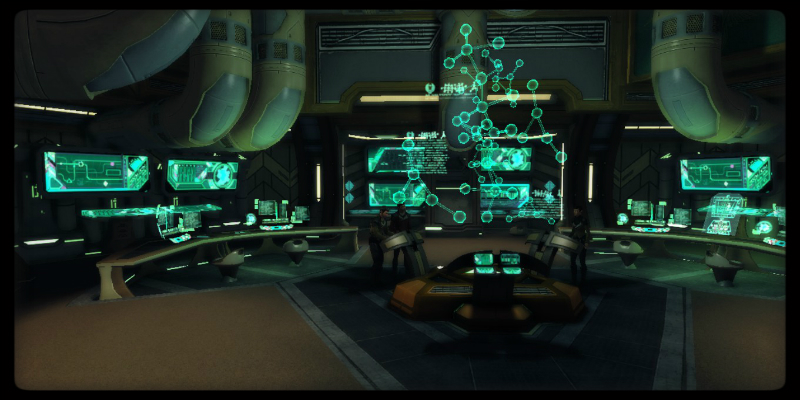 Often referred to as 'Main Science', Deck 13 houses the majority of the Science laboratories and sensor-systems. Long range and navigation sensors are located behind the main deflector dish, to avoid sensor-system mistakes or other detrimental effects consistent with main deflector dish millicochrane static field output. Lateral sensor pallets are located around the rim of the entire starship, providing full coverage in all standard scientific fields and can be monitored on this deck. Also from this deck each sensor pallet (roughly twenty-four) can be interchanged and re-calibrated with any other pallet on the ship to do as the scientist or captain desires.

Also on deck 13 there are twenty-eight independent tactical sensors on the Ar'Kif. Each sensor automatically tracks and locks onto incoming hostile vessels and reports bearing, aspect, distance, and vulnerability percentage to the tactical station on the main bridge. Each tactical sensor is approximately 82% efficient against ECM. These sensor systems have a direct EPS power feed from engineering, being only a deck below.

One stellar cartography bay is located on the deck below, number 14. All information is directed to the bridge and can be displayed on any console or the main viewscreen. The Sciences Department Head's office is located near to the Stellar Cartography bay.

There are twenty science labs on the ship; five labs are on deck 5 - adjacent to Sickbay, ten labs are on deck 13, two "microlabs" on deck 14 and three multi-function labs on deck 6. The five labs on deck 5 are bio-chem-physics labs that can also be reconfigured for Medical labs or bays. The ten labs on deck 13 are adaptable; three are often bio-chem-physics, one is an extra-terrestrial analysis lab, and one eugenic lab. There are two smaller labs on deck 14 which are astrophysics/ astrometrics and stellar cartography labs. The final 3 on deck 6 are also multi-functional labs that can be equipped for various experiments. An example of a typical Laboratory... 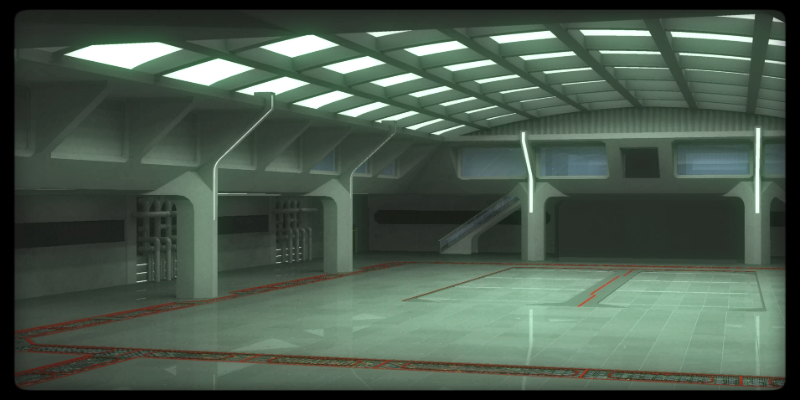 ((Information Sources: 1 2 3 Not much data on the Ar'Kif, unfortunately.))
To come: History of the RRW Alidar...
7 Likes