The U.S.S. San Jacinto was dispatched to the Saeril Colony to settle a dispute taking place between two senior archaeologists amid complaints of misused Starfleet resources for unsanctioned study. The Saeril colony is a joint Vulcan-Romulan Unificationist world that has been under Federation membership for several decades. Captain Parsons put together a small team of officers to tackle this investigation. Commander Se'lai of the Dawnstar was selected for her budding command and diplomatic skill set with this mission providing a good chance to experience some of the more routine disputes requiring settlement. Lieutenant Eunbi of the Gainsborough was selected for her empathic abilities and to help in assessing the mental health of the two scientists. Captain Delanno, who we were informed had returned to duty, joined us as a security escort, just in case. I was selected for any scientific analysis and Captain Parsons lead the mission.

The colony showcased a remarkable relationship between the Romulan and Vulcan inhabitants that has existed for decades, yet we soon found that there seemed to be a slight skew forming between the two groups revolving around the disputed matter. We first made contact with the head Vulcan researcher from Starfleet Academy Arrack who had been sent here to assist with the excavations. He had arrived with his human wife and half Vulcan half Romulan nephew, Rorik. Arrack was the one who reported the issue and informed us that his Saerilian Romulan counterpart who was in charge of the study had been siphoning resources sent by the Academy in order to pursue a hypothesis she had not cleared with Starfleet. The research supplied for was to investigate a civilization that inhabited Saeril long ago, indicated by several large ceramic pots and other archaeological fragments. Young Rorik seemed to exclaim to his uncle and aunt during our conversation about 'spider people' who he had spoken to. The stories had been passed off as stories he had made up to get attention.

We went to speak with the lead archaeologist Drrenai. Lieutenant Eunbi lead the discussion as the rest of us assessed the seeming conflict between Romulan and Vulcan researchers, the dispute seeming to dust up old prejudices. Eunbi reported that Drrenai had admitted to reallocating the resources but that she was pursuing a related hypothesis possibly towards a species of ancient visitors, indicated by plants of alien origin being found on the planet. She also seemed to suggest offhandedly that Arrack was seeking glory and would not have been surprised if 'he planted the pots himself'. In any case we saw it fit to investigate the hypothesis. After some local direction we discovered the alien plants and they were indeed of a foreign origin. The genetic makeup was completely different sporting a trihelical structure to its DNA and crystalline components to it. Further analyses of the root formation found a network of tunnels and crystalline caverns that lead throughout the colony and were growing in size. This growth seemed to be responsible for sinkholes underneath structures so we decided to investigate. 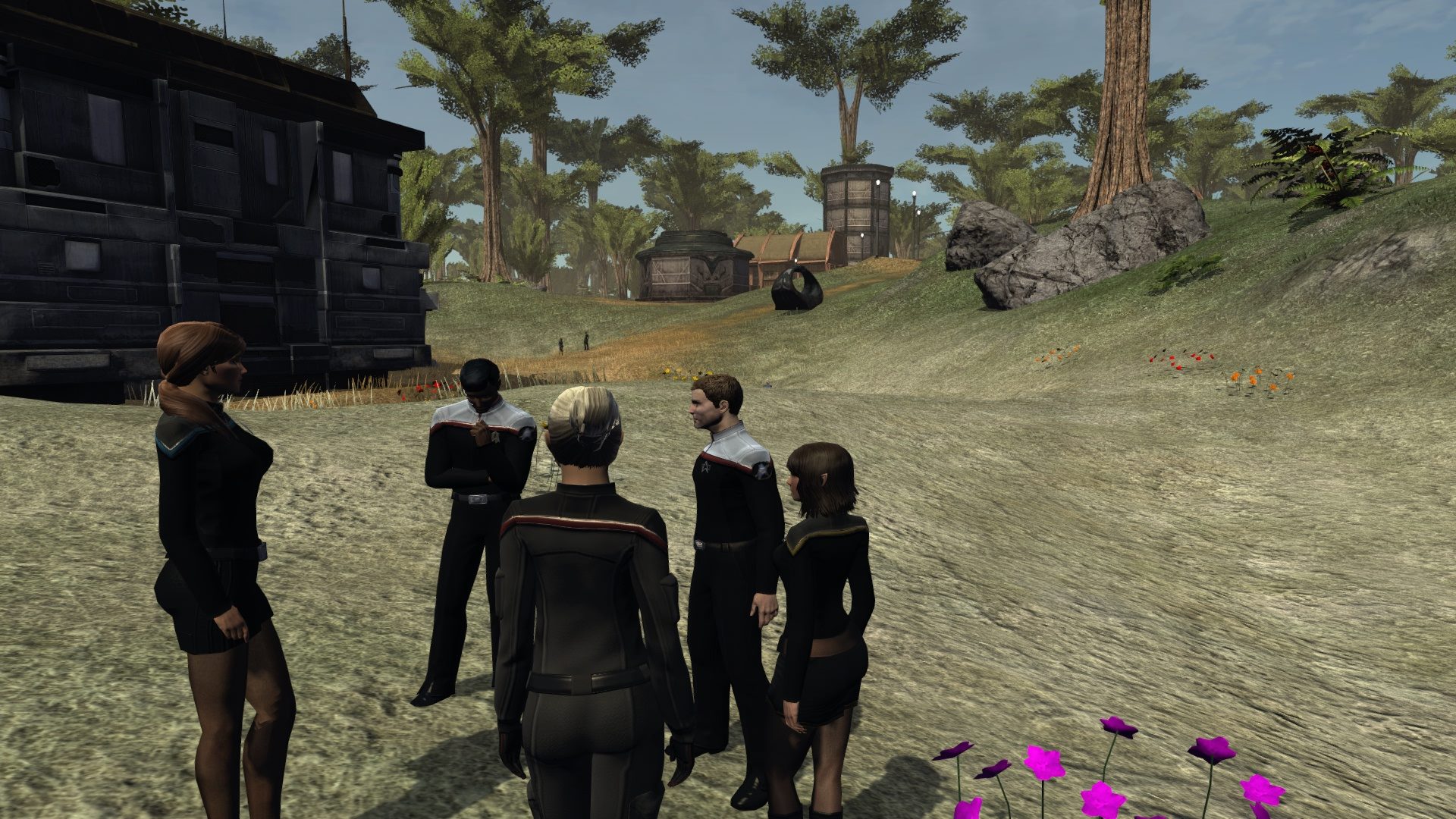 On our way to the cavern entrance there seemed to be a rather animated dispute between the colony governor and Professor Drrenai. The governor had chosen to discontinue Drrenai's research and hand lead of the dig to Arrack as a result of our presence. We moved on as our immediate task was of the utmost importance and we descended into the sinkhole. To our surprise, within one of the collapsed levels of a building we came across Arrack's nephew Rorik and a Tholian. From what we could grasp of the conversation, Rorik identified the Tholian as Charlotte and the two seemed to be discussing a plan. From what we could ascertain Charlotte was attempting to use Rorik to demand the Saerili leave their world, however Rorik was not believed by anyone. As we emerged to confront Charlotte, the Tholian panicked and took Rorik, descending into the caverns.

We pursued Charlotte into a rather unpleasant environment. It was incredibly hot and humid, certainly the result of great geothermal activity. We encountered several Tholians and were able to subdue them with minimal injury. We came along several logs made by Charlotte and found the Tholian was a statistician among their people, responsible for increasing efficiency in the terraforming work they were attempting to perform. Charlotte did not seem to hold antagonism towards the people of Saeril, in fact s/he seemed to be studying the behaviour of humanoids, finding some kind of connection towards Rorik. We continued pursuit but found only Charlotte who informed us Rorik had been taken by the Tholian overseer. 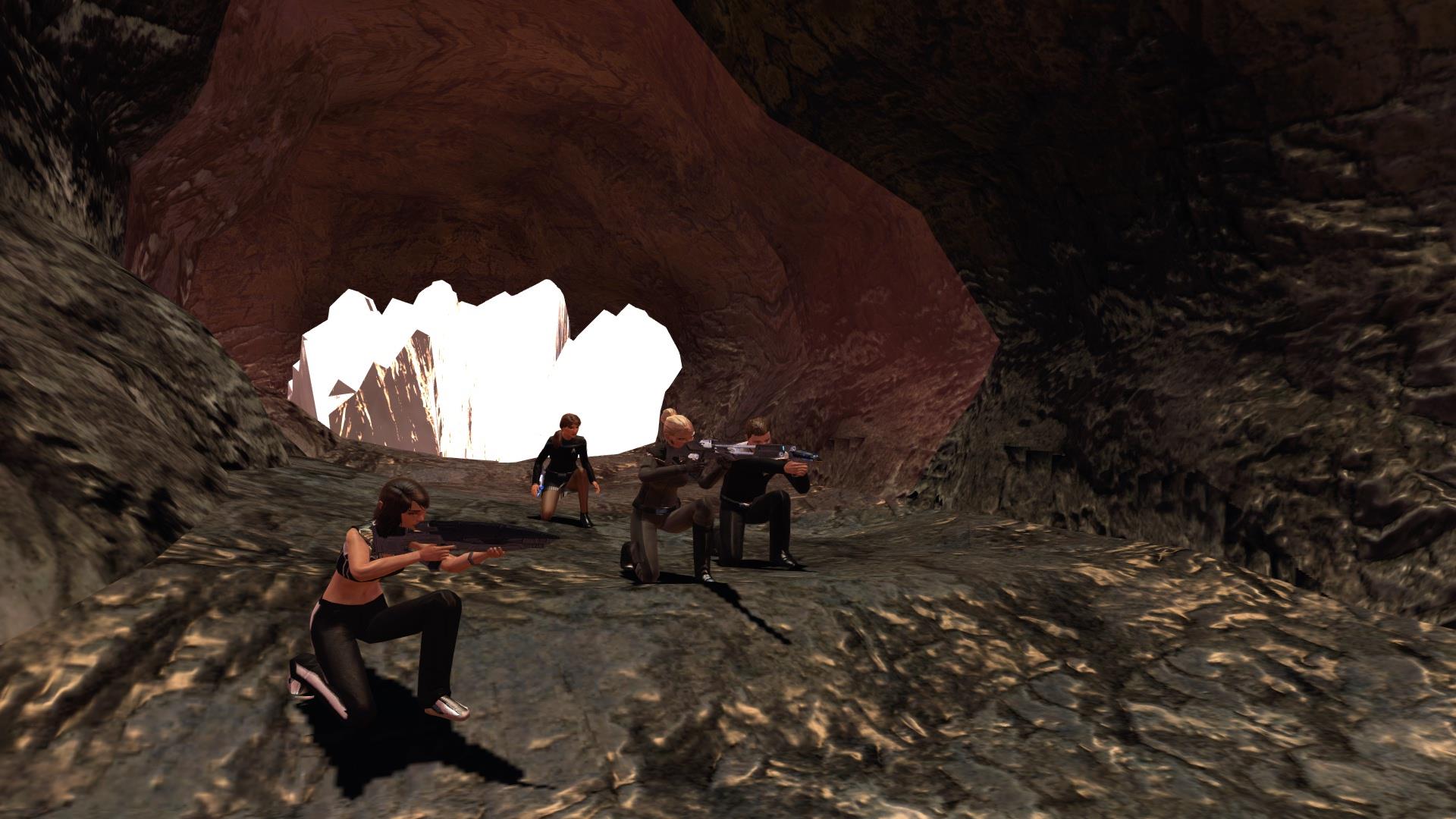 With the help of the San Jacinto ground team and Charlotte, we were able to escape the cavern before we passed out from exhaustion. With the help of Charlotte, who seemed intent on rescuing Rorik, we encountered the Tholians at a large crystalline formation about thirty eight kilometers east of the colony, what was described as a monolith seemed to be like these plants, a tool for terraforming the world into demon class planet. The Overseer seemed intent on having us relocate the Saerili, threatening to kill Rorik if we failed to comply. Charlotte seemed to have a plan and we approached the Overseer once more. Charlotte expressed how their efforts on the planet, of studying the 'humanoids' was not of waste, that there was efficiency within the ways we operate. We reaffirmed these arguments indicating that individuals bringing unique skills and traits together can make us stronger and more adaptable than a hive unit. The Overseer saw value in the assessment and in the spirit of peace, released Rorik and assured us the Tholian presence would be removed. 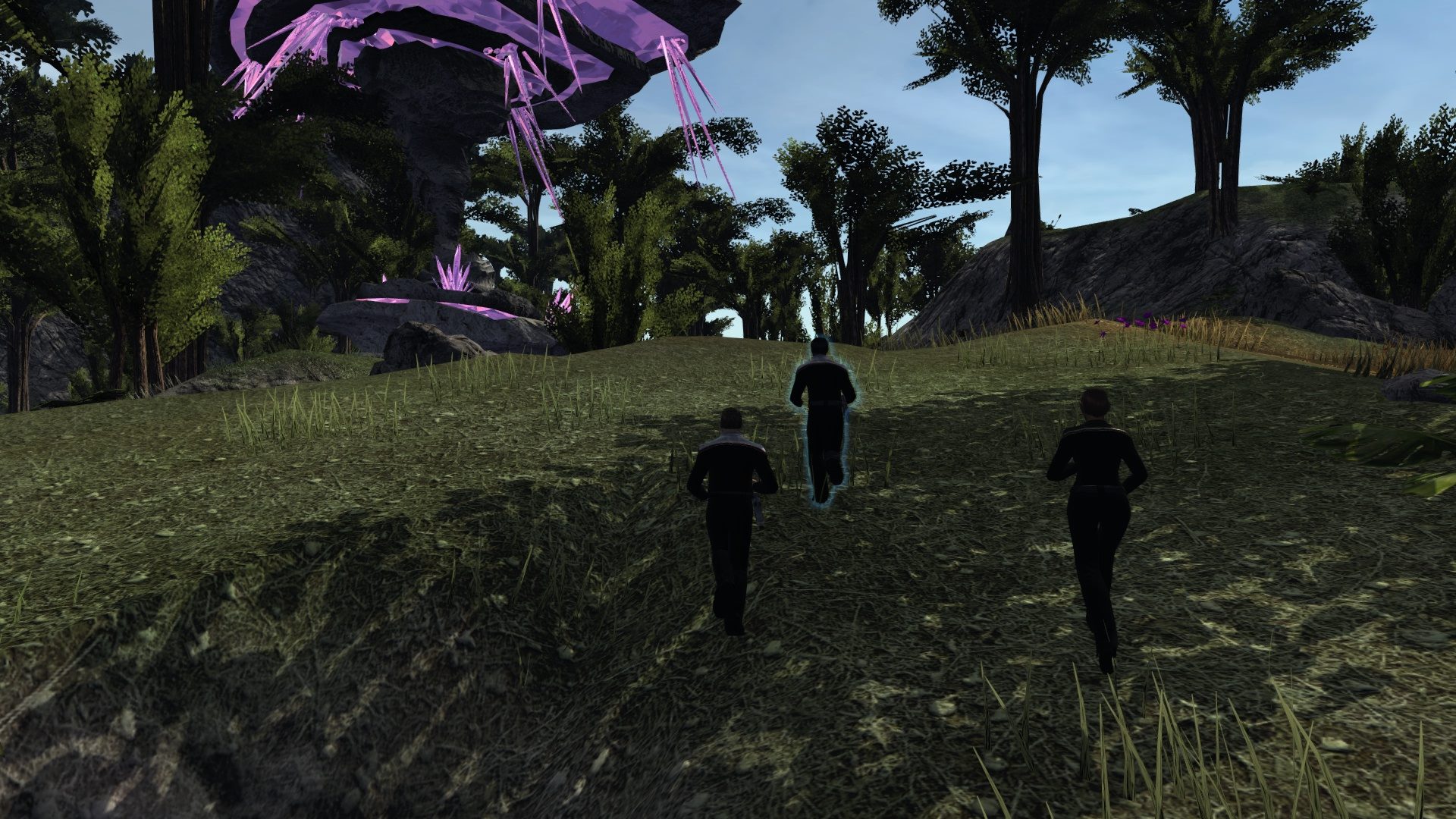 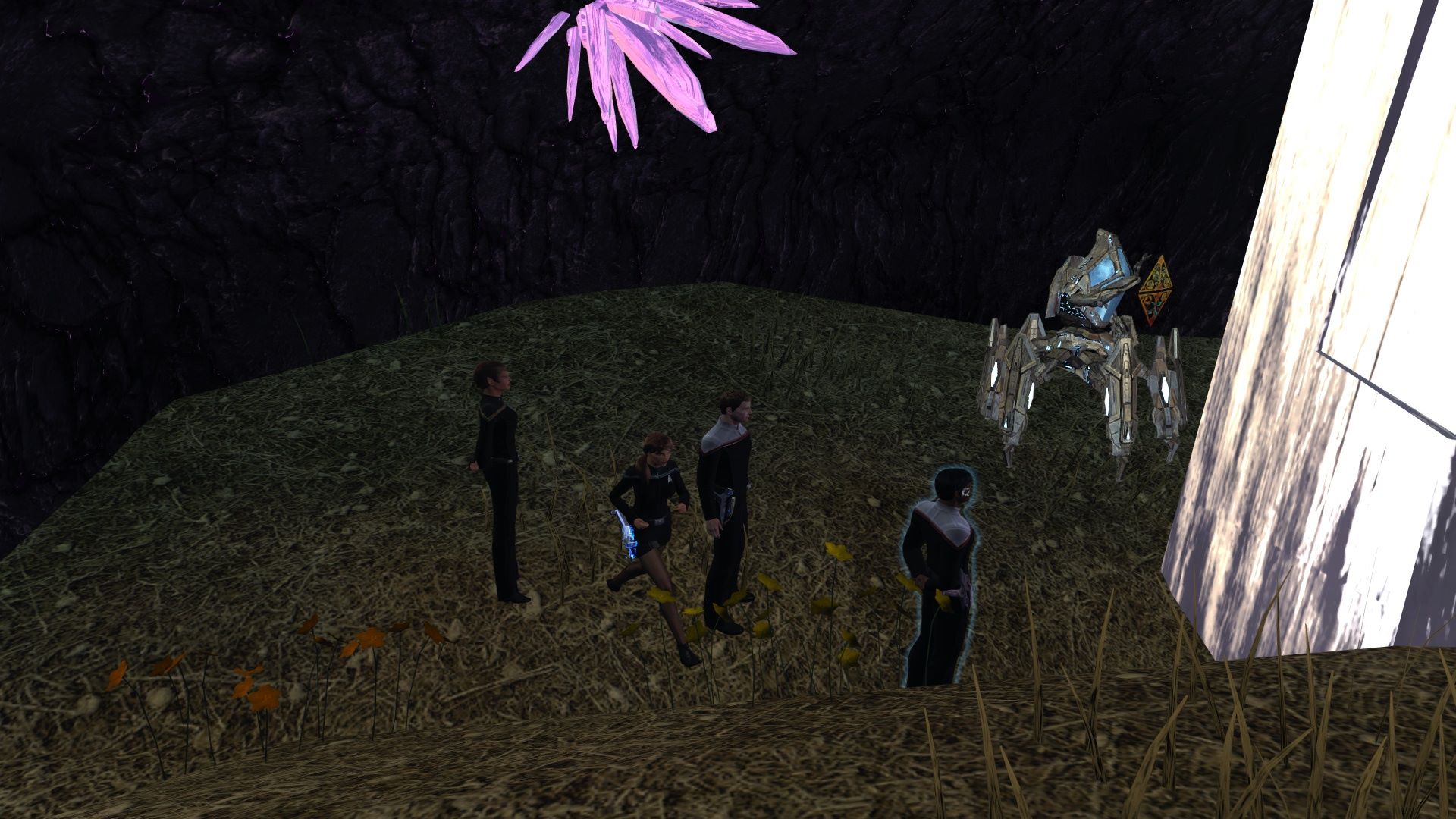 After returning to the colony and informing the people what had happened and providing them with the evidence we had uncovered, the two research factions seemed to find interest in each others discoveries and thankfully began finding healthier disputes within what conclusions could be drawn from them as opposed to accusations. Charlotte departed with the Tholians but asked that we leave Roris with 'a fragment of Charlotte's web', a small crystal shard.