Databank Ship Records
Quae_ April 5, 2013, 12:00am 1
Falcon wrote:
The plaque on the U.S.S. Bold has two quotes: Cochrane's encouragement to "boldly go," and the words of philosopher Robert Balboa: "It ain't about how hard you can hit; it's about how hard you can get hit and keep moving forward."
Tanis wrote:
U.S.S. Belleau Wood has on it's dedication plaque a quote from the famous battle of it's namesake. In large, bold letters above the long quote, is its final three words, "We will hold."
Tanis wrote:
The U.S.S. Dan Daly is named for a United States Marine from the early 20th century. Daly received numerous awards including two Medals of Honor. Her dedication plaque contains portions of a quote attributed to him "...Do you want to live forever?"
Oliver Blackwood wrote:
The U.S.S. Rhodes, captained by one Oliver Blackwood, is host to a dedication plaque with the words "To the very last man- and then a little while longer." on it.
Gretchen wrote:
The dedication plaque on the U.S.S. Semmelweis reads simply "If it isn't growing, it's dead."
Skyler wrote:
AG-21-8, despite being a facility rather than a ship, has a dedication plaque just outside their staff transporter room that reads: "Failure is just another data point."
Matt-Svenson_ April 12, 2013, 12:00am 2
((this is so cool! I want to partake. We don' have anything like this at the 26th. If this post is ruining the flow of the thread, feel free to delete it.))


* On the bridge of the USS Okoboji is a plaque. Below the name of the ship and its designation is an odd collection of blobs in no discernible pattern. To the unknowing it looks like a bad ink blot. To anyone familiar with the former state of Iowa on the upper American continent of Earth, it is a recognizable collection of natural lakes. *

"May your honor be as eternally clear and untainted as her deep blue waters. Okoboj."

*Above the door of the nondescript cargo hold of the USS Okoboji, used by its resident MACO team as their travelling home and training area, is a large stained piece of wood. Burned into the wood are these words: *

"Step humbly in these somber halls, for in them walks the forever presence of those who have sweat, bled and sacrificed. In their actions they have granted heavenly freedom to us, by bring hell to those that would deny it."
Ktiess_ April 12, 2013, 12:00am 3
Quote:
The bridge of the USS Ark Raleigh has a dedication plaque, like all Federation Starships. It details those who participated in it's design and construction. Like all such plaques it has a quote with special meaning at the bottom. It reads; "Promise me you'll always remember that you're braver then you believe, stronger then you seem, and smarter then you think." -Christopher Robin
Quote:
On the USS Ark Raleigh's flight deck is a mural that is dedicated to all the pilots that currently serve on board, as well as a list of all those pilots who have died serving on board. At the bottom of the mural is written; "May God stand between you and harm, in all the empty places you must walk." -Old Egyptian Blessing
xVAULTxDWELLERx_ April 28, 2013, 12:00am 4 (( Source - Furyofaseraph : http://furyofaseraph.deviantart.com/art/Starship-Dedication-Plaque-PSD-27314482 ))
(( Katriel generously edited this on my behalf; much nicer plaque than I could ever make, thankyou. ))


Spoiler: Show
So... I couldn't help myself, I had too :trollface: 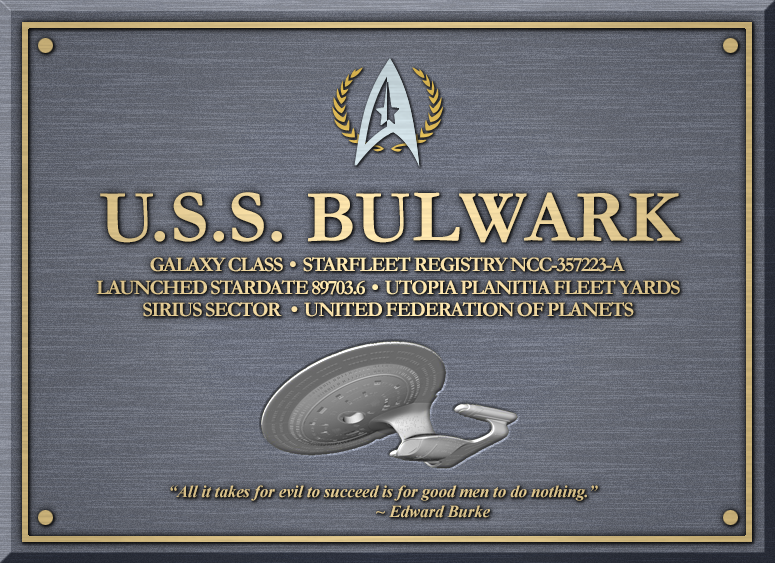 (( Source - Furyofaseraph : http://furyofaseraph.deviantart.com/art/Starship-Dedication-Plaque-PSD-27314482. Edited by Katriel to make this awesome plaque you see before you! ))
Quint November 10, 2014, 12:00am 11
The dedication plaque on the bridge of the USS Paladin is made of bronze with a relief of a downward pointing
sword in the background. The foreground holds the names of those who built and designed her, the symbol of Starfleet
artfully placed do that is lines up with the meeting of the hilt and blade of the relief behind it. These words, emblazoned
below, mark the ultimate sacrifice and fate should the day arise. They have yet to be uttered aloud by any crew member.
They merely wait for the right day.
"Blade with whom I have lived, blade with whom I now die, serve right and justice
one last time, seek one last heart of evil, still one last life of pain, strike well old friend,
and then farewell."-Sir Orin Neville Smythe
STokkr_ November 10, 2014, 12:00am 12
U.S.S. Formidable - “Heroes are made by the paths they choose, not the powers they are graced with.” - Anon.
Rylen-Yores_ November 17, 2014, 12:00am 13
U.S.S. Melbourne (NCC-93802) has on it a quote from Earth astronaut Ellison Onizuka, who lived in the 20th century, which reads, "Every generation has the obligation to free men’s minds for a look at new worlds . . . to look out from a higher plateau than the last generation."
Davin November 17, 2014, 12:00am 14
The dedication plaque of the Warbird D'Ishæ is housed at the rear of the ships bridge. The plaque itself is a piece of reformed armor plate, taken from a decommissioned D'Deridex. One that happened to use metals mined from ch'Rihan. Enscribed on its surface is this: "We are all soldiers, from the moment we are born. When we forget that, we invite disaster."
-Valdore
1 Like