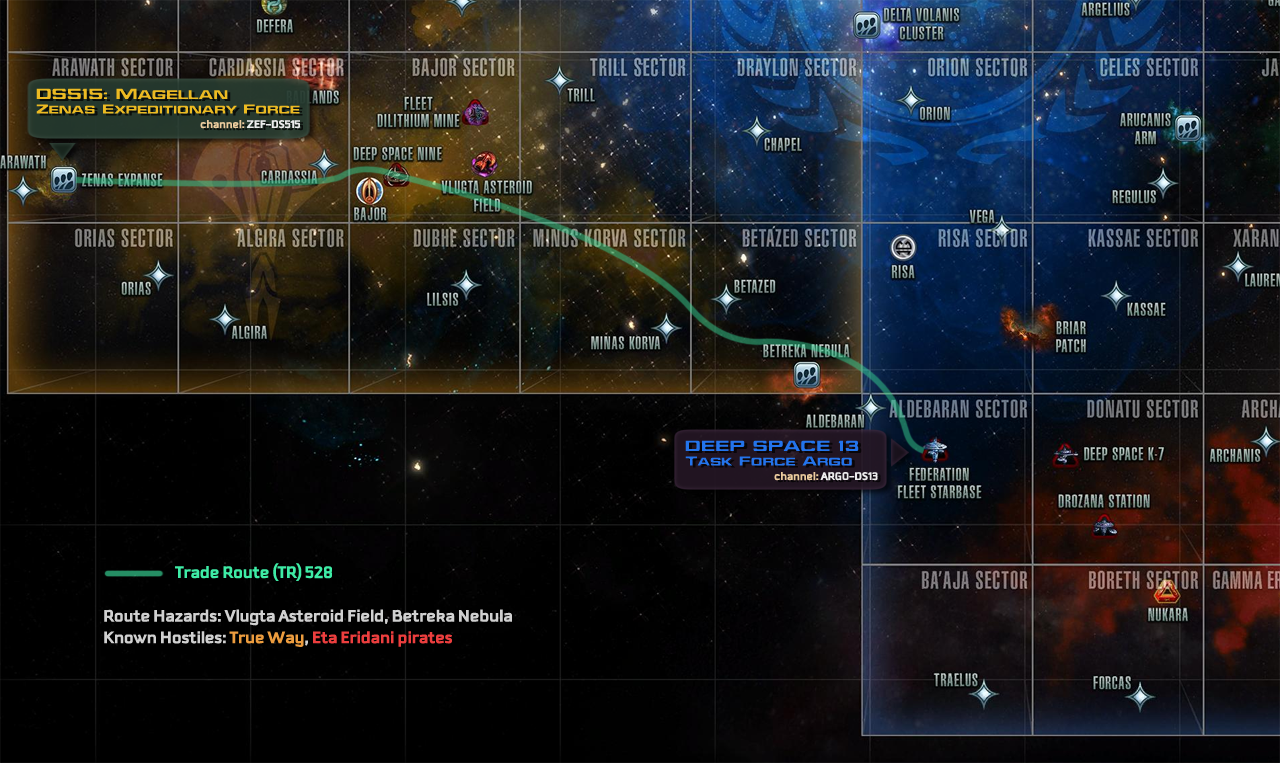 All ships conducting freighter escort or trade route security patrol are to check in with both stations during operations to ensure combined oversight can be maintained.

I am pleased to announce the continuing joint story arc between TF Argo and ZEF called Trade Route 528. The idea behind this arc is to allow for members from both fleets to visit each other's starbases, and allow for RP interaction between the fleets. This arc is not designed to have specific planned events going on at scheduled times, and then wait dormant for the GM to advance it. Rather, the idea is for this to be a "hook" for anyone to actively RP between the fleets.


Of note, time travel along this trade route should be taken into consideration. It could take a freighter travelling at lower warp several weeks to make the full journey. Clearly access to slipstream and the TWGs allow Federation quick reaction vessels to get to emergencies in a hurry, and we will always travel at the speed of plot to support RP, but simply "popping over" to DS515 IC for the afternoon, then coming back should considered not an IC action. We're definitely not trying to limit RP here, just making sure we all understand the IC travel times that would exist, and trying to add a bit of depth to our RP stories.

Please keep in mind that when visiting another fleet's starbase to adhere to their policies for story restrictions. No blowing up the starbase core, or sneaking in changelings without their admin approval, etc.

If anyone has any questions on how this might work, please ask the admin team. For reference, I am having the Atlas conduct an escort IC starting this Thursday and going through next Friday if you want an example of a "longer term" how it might work. Obviously the ease of visiting just for the night, and not actually RPing out the travel time can be done was well.

Anyway, I hope you all enjoy this exciting new interfleet cooperation. Admins from both sides have been working hard to make this a success, and I for one am really excited to see how this develops.

Thanks,
TFA admins ))
8 Likes
DePoe_ March 11, 2015, 12:00am #2
(Could we perhaps RP, that instead of actively escorting freighters, we have ships running what would essentially be combat air (or space if you will) patrols? So basically they would run independent of the convoys, and insure that the space the trade route occupies remains secure from pirates or other scum from setting up ambush points or or perhaps even coordinated attacks, as well as provide reinforcements when necessary. This could be a possible way to explain how a ship could be at DS13 one day, and at DS515 the next, since they are traveling at faster warp speeds provided by the fact that they aren't escorting any slow moving freighters.]
1 Like
Katriel March 11, 2015, 12:00am #3
re DePoe: yes.

For the most part, everyone has flexibility regarding the actual length of time required to travel the route. The goal of this is to increase your opportunities for RP, not limit them in any manner at all. We have loosely defined the route as taking "a long time" when its being run by NPC freighters, but you should not feel required to use that as a measuring stick to math out your player ship route.

So as long as you're not going around claiming that your vessel deployed from DS13 this morning and thwarted a couple pirate ships near DS515 and then you came back to DS13 in time for lunch, you should be fine.