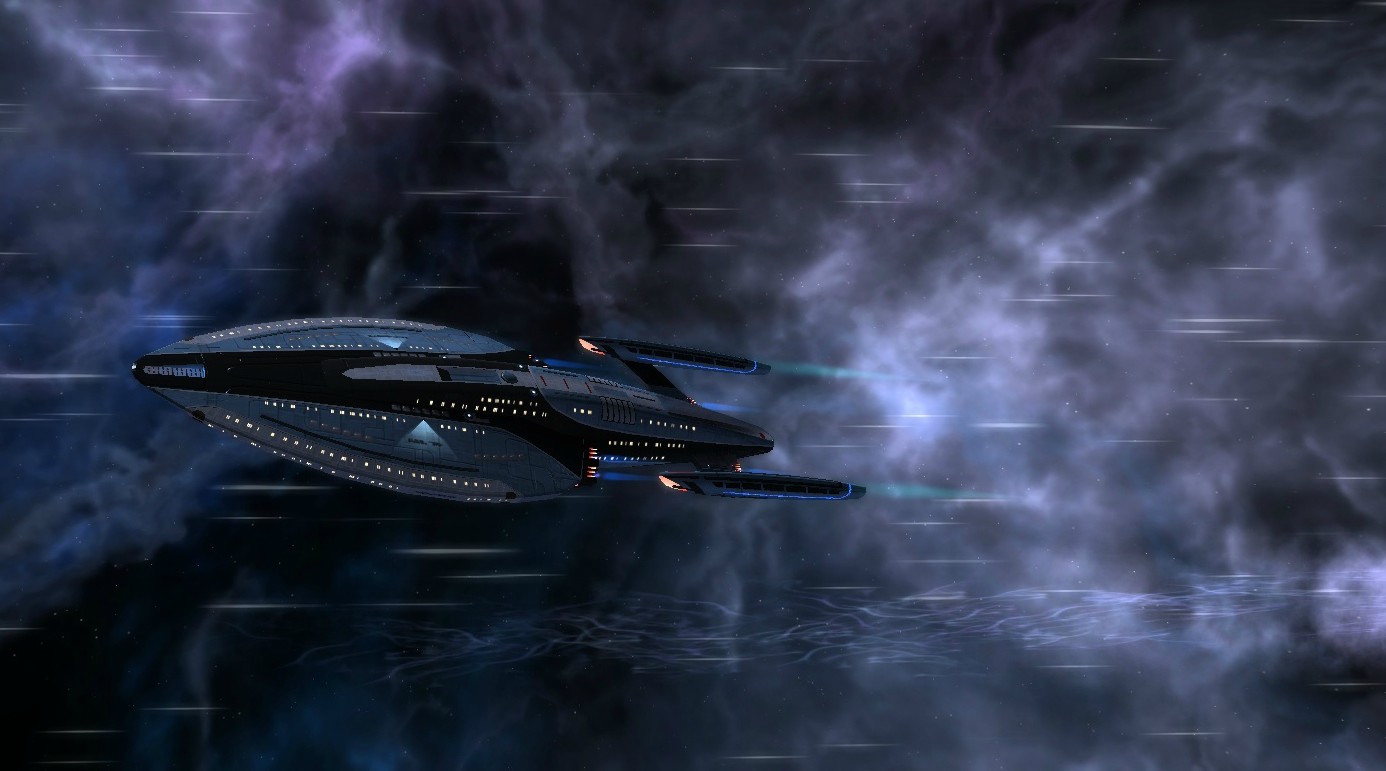 Built in 2380, the U.S.S. Troi is a Vesta Class vessel based on the schematics of the Aventine and capable of warp 9.9. Equipped with Luna class sensors and other cutting-edge technology, the Troi has been employed almost exclusively for scientific research and long range reconnaissance, due to the capabilities of the previously mentioned sensors.

Captain Kero Elan assumed command of the Troi four years ago. Due to her scientific background she was considered a good candidate, albeit not the only one.

Although the Troi does not possess one currently, it was built with slipstream drive in mind, as its geometry allows the ship to compensate for a phase variance which could cause earlier ships to be violently pulled out of slipstream with catastrophic consequences. The geometry helps with creating the subspace "needle" when the quantum beam is initiated.

The subspace "needle" is nothing more than a warp field bubble shaped like a needle, which would then allow the splitting of subspace to create the slipstream.

Despite the lack of slipstream drive the Troi still possess an advanced sensor system that allows it to take specialized readings located at a specific focal point ahead of the vessel. This is to compensate further for any possible phase variances.

A quantum field focus controller was part of the prototype schematics, but due to the lack of slipstream drive it was not installed on the Troi. The controller can still be installed, should Command wish to equip the Troi with a slipstream drive. Without it however, it would be a waste of resources due to the intricacies of the technology.

The Vesta has advanced cannons that tap into the ship's auxiliary power to offset the considerable power drain of the weapons. This allows the ship to fire the cannons for a prolonged period of time without issue. The Vesta was the first ship class with scientific focus to be equipped with cannons.

Due to the nature of the reconnaissance missions the Troi has been in, Captain Elan devised a system where a dampening field is constantly projected along the ship's hull in order to deflect sensors at least partially even when the ship is not actively masking its signature. This explains the constant translucent blue layer around its hull. This does not provide full stealth nor does it completely hide the ship from sensors (although it's significantly harder to detect on long range), but when the ship's signature is masked it is very difficult to detect it unless you are looking out a window.

The Vesta is equipped with landing gear and has shuttle bays on deck twelve.

The shimmer on the Troi's hull caused by the dampening field.
8 Likes