MISSION Destroy the Confederacy of Azed.

OUTCOME The governing body of the Confederacy has surrendered and is in custody. Their military has been routed and is in full retreat to the remaining free Azedi worlds. A doomsday weapon has taken hold in orbit over Azed, and within days it will consume the planet.

NARRATIVE Following victory at Itrin and Kacam, the success of covert operations on Viggo, and the recruitment of the Junayd, the 38th Battlefleet departed Itrin for the capital of the Confederacy, Azed. Previous operations enabled us to make the journey without encountering or alerting any Azedi patrols.

We arrived at Azed in force and split into strike groups to overwhelm the planet’s defenses. We faced heavy resistance and the bulk of the remaining Confederate Navy. Though several starships were sacrificed for the good of the Empire, including the Kubla Khan and the Valkyrie, we inflicted far more destruction than we suffered. In all, 14 wormhole-powered dreadnoughts were destroyed, along with their supporting fleets and all starbases around the planet. 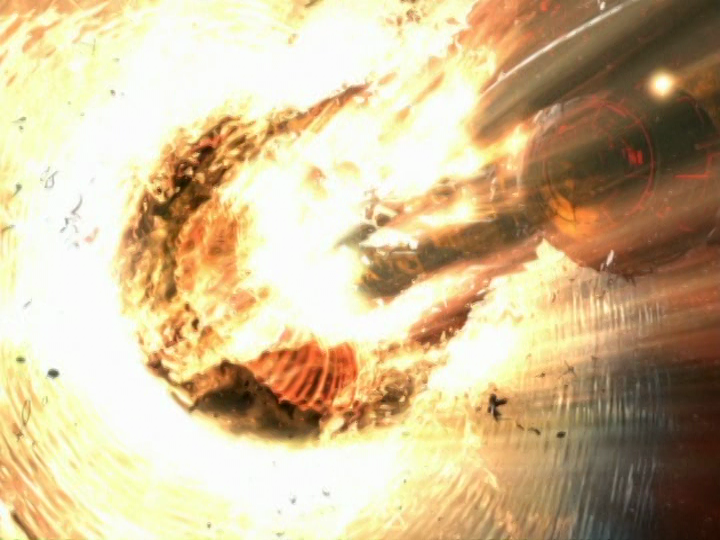 An Azedi Dreadnought destroyed by the weaponized wormhole aperture.

As a noteworthy additional bonus, our sabotage of the coordinate database on Viggo led to an incident during the battle in which an Azedi starbase attempted to open a wormhole to bring in reinforcements, but instead tethered themselves to a black hole. The starbase was immediately destroyed and the resultant wormhole-singularity hybrid greatly enhanced the level of devastation rendered upon the system, obliterating any ships that passed nearby. In fact, the anomaly remains in orbit over Azed. With nothing to stop its expansion, it will consume the entire planet within a matter of days.

With the Confederate fleet decimated, key targets on Azed were destroyed from orbit and their ruling body “The Cabinet” was easily captured. The Frith Minister refused to surrender and was executed. The remaining Ministers quickly saw the wisdom in accepting Terran rule. They have been taken to the agony booths to prepare to issue orders recalling the remainder of their forces.

Despite the impending destruction of the planet, the Azed System will serve the Empire as another fortified beachhead from which to expand our reach. I expect that the Confederacy will be fully occupied by day’s end tomorrow.

This momentous occasion marks the completion of our primary goal in this universe. We now turn our eyes to other objectives.

OOC Once again, thanks for coming, and thanks for your patience using the combat framework! We’re getting better at it every time!

MISSION Destroy the Confederacy of Azed.

NARRATIVE Azedi forces engaged above Confederacy homeworld. Azedi forces defeated with acceptable losses to Imperial assets and personnel. As of writing Azed system is being brought under Imperial control and fortified for use as a staging ground for further actions in adjacent star systems.

Glory to the Emperor.

While orders to lay down arms were being acquired from the surviving members of the Confederacy’s cabinet, I assembled two squadrons of Terran vessels sufficiently combat capable after the battle for Azed. Squadron Beta proceeded on course to Ralin and Citali, lead by the I.S.S. Guy Fieri, while Saratoga lead Squadron Alpha to Viggo and Ikmore.

Despite the orders to surrender arriving before we did, a number of ships in the Viggo system violently resisted subjugation. It appeared that during Azed’s fall, the ruling government of Viggo was overthrown by its own people. However, as all their Dreadnought-class vessels had been committed (and destroyed) at Azed, they were unable to repel us. Thus proving themselves unable to coexist with the Terran Empire, their homeworld was rendered uninhabitable by orbital bombardment.

No other issues were encountered or reported. The Confederacy is destroyed, and its surviving people are now subjects of the Empire. However, a re-evaluation of our relationship with the Junayd is advised. Our alliance was built upon a mutual enemy, which is now defunct. Furthermore, Captain Barron, our primary negotiator for these aliens, has been confirmed dead after the battle for Azed. As we turn our eyes to further objectives, it would be wise not to leave loose strings.