Holodeck Short Stories
Quae_ December 16, 2016, 12:00am #1
((Once upon a time there was a log for Iyalshir, my KDF character. Dunno what happened to it. Here is an old post, reposted. She's an invented species who's highlights shift colours depending mood.))
Spoiler: IyalshirShow 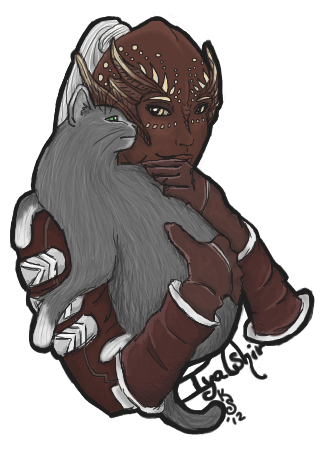 “Would you leaaave me for the Commandant?”

His hesitation cost him.

His captain's colors flashed, a shift to green that warned of her ire too late. Fingernails raked across the tiny interlocking scales of his cheek. When it proved impenetrable, knuckles struck the other side of his face in a backhand.

It stung, but as costs went, it was cheap.

The mi'xu'yie redirected her lashings to something that would react more than he, sending data pads and drinks scattering to the floor in a sweep of her arm. “What- will I /do/, Sireg. If I. Cannot. Trust. /You/!”

He watched her destruction impassively, willing himself as unresponsive and immobile as the things she did not have the strength to upset. The support beams, the bulkhead, the table, the bed. 'The Gorn' must be just as fun to rail against as these: not at all.

This was part of his duty. Witnessing and accepting her abuse, shielding the crew from unspent wrath until she becalmed herself. To him, she posed no true threat. Injurious, yes, but never murderous.

Everything not bolted down found itself involved in her hurricane rage. Mugs, data pads, boots, and even, flinching to avoid it, a glass-blown gift from a grateful client. It exploded into crystalline dust.

The sound gave her satisfied pause, poisonous green pulsing to an alerted yellow in rhythm to her exerted breath. Precious silence reigned as she watched the glass motes adjust. Heavier grains peppered the floor, lighter drifted gold in the glow of lights.

“When you leave me, Sireg,” She spoke with a suspicious calm, “Make sure to kill me.” She wheeled on him, lapsing into the sing-song wheedling tone she used on her marks. That is, the tone she used on almost everyone: “Spare one the heaaartbreak of having to huunt you.”

He hesitated again, knowing that this time it would please her. His captain picked her way around the mess she'd made with sultry grace, poised before him with a smile.

“If the Commandant wiiiins, you may go to him. If he looooses, you are mine, Sireg.” Fingertips touched where fingernails had already been. He remained outwardly aloof- the elaborate mask of markings about her eyes were still flushed green, and so her mood was dangerous still. Her soliloquy should go uninterrupted.

“I will neeeed you, to speak for us, should the Gorn Hegemony prevail. Do not let the Commandant forget those who stood by him at the start. Should it not prevail, then, then I will neeed you as I always have.”

She spun, mincing her way to the console and its viewscreens, using elaborate, thespian gestures to emphasize her speech, figure silhouetted black against red glow. He had no doubt the intended effect was lost on him.

“I have placed my bets on the riskier side. One knooows her people question. One knoooows even Naiul wonders at his mother. But they will come to know what one has done.

“The Riles of the Gorn will not forget those who have done service, even should he lose. One will have made a 'friend', in success or failure. A powerful friend.

“The Wrot'ka of the Klingons will not forget those who have wavered in faith, and will not /trust/ us to fight in dinky, silly Klingon battle formations. They will let Sen'baal do as she's always done, they will merely be watching, watching, never turning their backs to us, never letting us in the ranks of KDF.”

She paused for dramatic emphasis.

He relaxed as his captain turned a catty smile over her shoulder-- the smile was framed by yellow markings. He could exist as a moveable object again.

She welcomed him back to the perceived living and prompted him to speak, with a hand flourish, and when he, still unsure, did not respond, she filled in the script herself.

“And what of honor and revenge, should Sen'baal meet mighty combat with the Wrot'ka's men?”

She waited, hands arching to press fingertips to their opposite, idly tapping joined pointer fingers against her lips. She was waiting for him.

He obliged, asking, “And what of honor and revenge, should the Sen'baal engage against them?”

“Rangruk, he is in the brig, yes?” Her voice peaked in excitement with the unfurling of the next piece in her plot, almost starting before his question had finished. “For concerns about our alleeeegiances? When battle time is neigh, let him escape. He is sneaky, he is clever. He will not take ooover the ship, he will disable it! Make sure he has opportuuunity. Sen'baal will not partiiiicipate in bloodletting, and it will not be one's fault.”

Her words were weighed and shifted. He took conjecture and bloated speech aside and reduced what was left into orders. Rangruk, their chief science officer, their /Klingon/ science officer, was to be allowed escape and access to parts of engineering. Timing would be imperative... and up to him.

He nodded slowly, and his captain pounced across the room. She attached to his arm and steered him outwards for bridge, giddy in her whisper:

“There are threee~ sides, Sireg. One will lose, and two will win. A price will be paid as prices must, but~, since one is cunning, Sen'baal will win regardless of the other victor.”
3 Likes