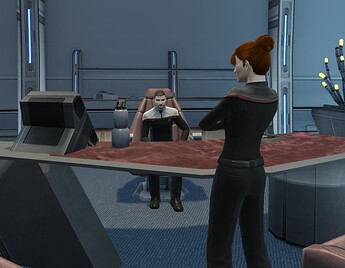 Maikull: Going…Where? (He inquired, leaning back into his chair and giving her his full attention)
Jessica: No, the answer is ‘Yes’. Don’t make me drag the crew into this.
Maikull: (a bit perplexed and curious) Ok…ill bite. Where am I going?
Jessica: (withdraws a small padd from her shirt and slides it across his desk.)
Maikull: (reads the data on the padd)
Maikull: (puts the padd down) Absolutely not. (He decreed decisively)
Jessica: Yes! As your Executive Officer, I strongly encourage it.
Maikull: Noted, as your Commanding Officer, I Overrule that.
Jessica: Fine, as your -WIFE-, I’m not giving you a choice! You -NEED- to go.
Maikull: (tosses the data padd aside) No! Last time I tried something like that, I made a damn fool of myself.
Jessica: Honey, you tried to initiate small talk with a Vulcan… you walked into a Kobayashi Maru on that one. At least you cut out while you were ahead.
Maikull: (in a mocking tone) ‘Your desire to flee social interaction is noted’ from the Fleet’s Adjutant of all people… (he buries his face in his hand)
Jessica: That’s why you need to go to this, this is perfect! It’s an informal gathering, people will be there specifically to get to know one another. You’re not going to earn that extra pip off service accolades alone, you need to show yourself to the Admiralty.
Maikull: You mean go there to kiss ass?
Jessica: No. Look, I know it’s hard, given our career paths, especially the kind of stuff we did before command. But Socialization IS a part of our duty. Admittingly it was easy for me because of my telepathy. But when it comes to work related tasks, you can be the most commanding and dedicated man in the room…you just need to translate that to when you’re NOT wearing the uniform as well.
Maikull: (mulls things over before rolling his eyes) FINE…But this goes south, you forfeit that manipulative ‘as your wife’ card.

1 Hour before the Event

Jessica enters the shared quarters of her and Maikull, finding the Commander sitting on the edge of one of the chairs reading reports off his Data Padd.

Jessica: “About ready to head out?” (She asks, already sensing his apprehension)
Maikull: “Yea yea…just, going over these…” (He started, before shifting) “Did you see, Lt. Buhel wants to host a Anbo-Jyutsu Tournament next weekend? Then there is a KDF Re-Supply in the Ba’aja sector I need to get with Zac—” (he trailed on before Jessica plucked the padd from his hands)
Jessica: “Nuh-uh…” (she said with a smirk,) “These are all topics -IM- going to address while our strapping Captain makes a formal meet-and-greet with fleet personnel.”
Maikull: (closes his eyes and breathes in deeply, a mixture of light anxiety and agitation radiating from him) “I know…I know…your right. I’m just…”
Jessica: “Trying to find a way out of it?” (She giggled.) “We joined the fleet, and before we could properly get acclimated, we got the whole Klingon Civil War thrown at us. Now that things have settled down, its time to at least get to know our neighbors. Remember when we met Captain Drake? He was nice. You can’t learn everything about people from their dossier files.”
Maikull: “Yea…remember when we met Captain Mirazuni? She was a real charmer.” (He shot back with a grin. He withdrew a pair of his Risan Sunglasses he had grown attached too and slid them across his face) “Well, how do I look?” 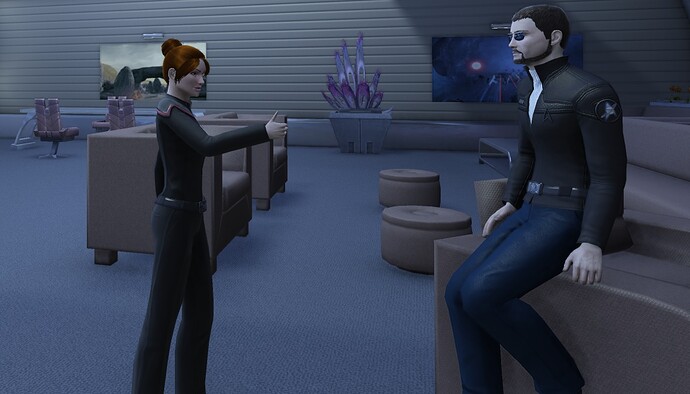 Jessica: (She smirks at his blue-jean and black leather jacket approach) “The glasses are good for an entrance, just remember to take them off when you start to talk with people.”
Maikull: (He takes the glasses back off and slides them into his pocket) “Right.” (Taking another deep huffing breath, he hops off the chair and leans over, giving his wife a kiss) “ Alright. Red Alert, all hands wish me luck.” (He teases as he heads out of the room)
Jessica: “Remember, Katriel’s betazed too! I give her full permission to hone in on you if you try to slink away too early.”
Maikull: (turning to face her as he continues to head for the door) “Why don’t you just put a shock collar on me while you at it?” (He snickers)
Jessica: “Come home still wearing that jacket, and I might have one replicated waiting for you.” (she mocks)
Maikull: (His attitude changed from anxious to a more roused salacious one, his tone dropping to be more domineering.) “You do that, and I guarantee it will get used, but it wont be me wearing it.” (he stated as he crossed the threshold of their quarters)
Jessica: (She raised an eyebrow at his words, and just before the door closed, called out) “Promise?”