The USS Dragon (NCC-93887) was a Federation Buran-class starship operated by Starfleet. This was the third vessel of the class and the first Federation starship to bear the name. The Buran Class of ships were loosely based off the design of the old Cardenas Class ships from the 2250s, as part of the Yard 39 Project, in which some of these space frames were discovered 150 years later in Yard 39 Spacedock in the TL-9139 system, abandoned due to heavy baryon eruptions from the star in 2259. The Buran Class design resulting from this borrows many design cues, but is a modern 25th century vessel, with a surprisingly heavy offensive and defensive loadout for a ship of its size. It also boasts advanced tactical sensor and communications arrays in addition to its primary systems, as the ship was intended for a command, control, and communications role in fleet engagements when designed. The ship has proven unpopular with the Admiralty, however, due to its compact size, making it rather cramped with the addition of their staff.

The Dragon herself is named for the "Crew Dragon Capsule", which was an early spacecraft in use in the early 21st century in the United States of America, on Earth. The "Buran" for which the class itself is named, is also an early spacecraft from Earth, though this time from the Union of Soviet Socialist Republics. The "Dragon" name, however, has been used by many ships beginning in the 16th century in the Royal Navy of the British Empire, later United Kingdom of Great Britain and Northern Ireland, also on Earth. These ships would bear the name H.M.S. Dragon, referring to "His/Her Majesty's Ship" under the naming conventions of Britain.

The USS Dragon was launched into service shortly after the first of her sister ships in the Buran Class. A few decades after the Dominion War, and with Borg incursions just prior, the designers were surely somewhat gratified to have added a tactically minded class of ships to the fleet, even if otherwise sobered and saddened by the need for them. However, task force and fleet engagements would only become more common in the years to come. The USS Dragon herself would see some action in the Elachi invasion, and some skirmishes with the Borg that kept popping up, but by 2415, after the end of the Iconian War, the USS Dragon was assigned to the Celes Sector, attached to Starbase 114.

The idea behind this posting was to hopefully scare away the pirates, mostly part of, or working for, The Orion Syndicate, with a gunboat of a ship, among the other vessels already stationed on patrol in the sector. This strategy worked some of the time, but not universally. However, the Dragon and her crew would always be much more than a match for foolhardy pirates attacking freighters.

In 2418, Admiral Wainwright was able to transfer his flag to an Odyssey-Class starship, and it thus ceased to be utilized quite for its original purpose as a command ship, and was transferred to the command of Captain Drake Tungsten.

In 2420, the decision was made to replace the USS Dragon with 3 smaller ships that should still be able to defend themselves and cover more ground, in the Celes Sector, so the ship and her crew were transferred to Starfleet's 38th Fleet, based out of Deep Space 13 in the Aldeberan Sector, where it should prove better suited to the challenges they face.

The USS Dragon was destroyed in combat in 2421, on patrol along the Klingon border, when rescuing refugees just inside Federation space. All hands were evacuated safely, by blinding the remaining Klingon ships' sensors as escape pods were launched, and programming the computer to ram the three ships sitting nose-to-nose with the Dragon, lodging its saucer section into their bows, and self-destructing, to cover the crew's and refugees' escape, after already fighting a hard battle with two other Klingon Vor'cha Class Battlecruisers of House Mar'Voga. USS Dragon defeated a total of five enemy ships in her last action.

The Buran-class was 446 meters long, 250 meters wide, and 78 meters high in total. Without its nacelles, which added significantly to the length and draft, the starship was 289 meters in length, had a beam of 240 meters, and a draft of 47 meters. It had a displacement of 3,050,000 metric tons.

Holding an M-class environmental standard, Buran vessels carried a operational crew of 480 and a standard complement of 600 when operating as a command post. Due to limited space due to its advanced systems and C3 capabilities, the starships had a rather small maximum evacuation capacity of 3000. 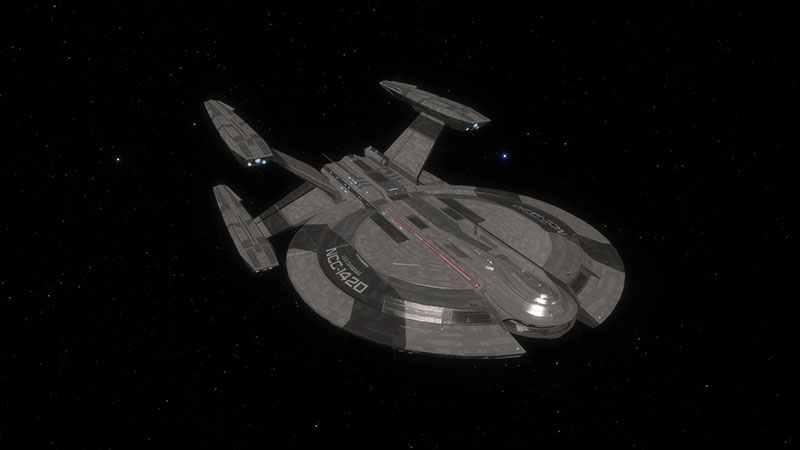 The Cardenas Class, upon which the Buran Class design is based.

Starfleet engineers implemented many concepts from the C3 Development Project into the Buran design. This allowed for starships of the class to function as mobile command posts. The class' multiphasic communications antennae, located in fins stretching along the dorsal hull, were capable of relaying battle-critical information instantaneously. A dedicated computer core allowed for real-time processing of high amounts of tactical information. This was all interconnected in the unit operations center, where leadership could use the full capabilities of the C3 cruiser when coordinating with other Starfleet or allied vessels.

The class also carried a single Rigel Labs X06-C quantum slipstream field projector, which allowed each vessel to travel at slipstream speeds exceeding 300 light years per hour. However, due to power limitations at the time, the drive could only be operated for 15 seconds before needing a 2 hour recovery downtime.

An Ithra IT-5 Transwarp Coil allowed Buran-class starships to connect to the Federation Transwarp Network and jump to gateways within the network at speeds of 360,000 light years per hour. The system had massive power needs, even more than the quantum slipstream drive. To power the coil, starships had to divert energy from weapon and shield systems. Due to strains on the IT-5 coil, it could only be used once every 20 hours.

Though the Buran-class was designed to serve at the center of Starfleet units in a command and support role, it was still outfitted with several defensive armaments. Vessels mounted 13 type-XV Annular Confinement Beam-jacketed phaser arrays and 6 variable-payload Mk 112 direct-fire launch tubes. Quantum torpedoes were carried as standard ordnance, but the Buran also carried a complement of tricobalt devices for the bombardment of heavy targets.

The Buran-class normally has between 10-16 shuttlecraft and 6 CMUs in its hangar bay, but the USS Dragon was modified in 2420 to carry 6 Peregrine fighters, and 2 delta class shuttlecraft.

These fighters would normally fit 2 deep and 3 across, but with no other usable space in the hangar, and very tightly even for their own operation. Under Captain Drake Tungsten, modifications were made to use the deck below with a lift system in the hangar bay to keep at least 3 of the fighters on the lower deck if needed for maintenance, and to help with letting the shuttles in and out of the bay, with another lift system to hold the shuttles near the ceiling of the bay if necessary. Even with these modifications, the Dragon's shuttle hangar would be considered very cramped when all craft are aboard, but the crew has made it work, and enjoyed more tactical flexibility with the addition of more phasers and torpedoes being deployed in engagements from multiple angles.

Because as of writing, the ship is no longer being utilized as a flag ship for fleet engagements, the Tactical Command Center is most often utilized for Flight Operations for the fighters.