The U.S.S. Peacecraft is a Yorktown Class vessel, serving in the role of Exploration Star Cruiser. Assigned to Taurus Squadron, 38th Fleet, and under the command of Captain Christian Dubois, the Peacecraft is deployed mainly as an advanced diplomatic and command & control (C2), long-range reconnaissance, and exploration and survey platform in the outer reaches of the 38th Fleet’s area of operations.

Originally a part of the first batch of Odyssey Class units, the Peacecraft officially came into service at the end of 2410, coming out of the Utopia Planitia Shipyards. Under the command of Captain T’Val, the ship performed two long-term exploration assignments, each lasting for six months. In 2412 the ship was assigned at assisting the Federation Diplomatic Corps for a relief and assistance program, combined with the opening of diplomatic channels, with outlying Romulan colonies. The year after saw a drastic change of scenario, with the Peacecraft used as a frontline vessel against the Undine, which also meant being involved in a number of skirmishes and, finally, in the battle of Earth, though in a reserve role. With the end of hostilities with the Undine, the Peacecraft was temporarily assigned to the Delta Exploration Initiative, joining a first round of explorations before being recalled for an upgrade of its EPS systems. Unfortunately, the period of peace wasn’t to last longer: in 2414 the sudden Iconian invasion meant that the Peacecraft was once again deployed on the frontline, participating also at the Battle of the Sphere, where it sustained extremely heavy damages in order to cover the retreat. Starfleet deemed it to be of primary importance, during those critical moments, to keep as many ships as possible on the line, thus the Peacecraft was patched up in the quickest way possible and sent once again in the midst of the conflict. The ship barely escaped destruction during the Second Battle of Earth, however loosing a major part of her crew, including Captain T’Val.

Reconstruction as a Yorktown Class

The recovered hull was moved again to Utopia Planitia, where it laid during the times of the reconstruction effort. After more than one year Starfleet decided to replicate the experience made with the U.S.S. Yorktown, and the Peacecraft was almost rebuilt from scratch as an Odyssey II batch, Yorktown Class. Implementing all the new technologies and systems took a long time, and the Peacecraft finally had her shakedown cruise in 2417, under the new command of Captain Dubois. The Peacecraft became a completely new vessel, built keeping in mind specifically enhanced diplomatic and scientific capabilities that were deemed to be of the utmost importance in a post-war scenario of Starfleet rebuilding itself and focusing once again on its primary mandate of scientific discovery and diplomacy.
The ship saw its first new assignment conducting an exploratory survey in the Volanis Cluster, which also served as a way of testing the new systems. After that, it was assigned to a long-term exploration in the outskirts of the Argus Sector, before being finally reassigned, this time to the 38th Fleet.

The Peacecraft is a typical Yorktown Class vessel. It retains the 37 decks layout, and it is able to sustain a crew of 2,100, though it could be operational also with a complement of 900, plus a total capacity of 20,000 to be hosted in case of emergency evacuations.
In order to fully support such a crew, and to offer the best possible venue for diplomatic meetings and conferences, the Peacecraft offers some of the most lavish accomodations (and relative facilities) in whole Starfleet. These include private sleeping accommodations for all crewmembers, though all personnel ranked ensign or lower share suites with varying numbers of bedrooms connected to common areas and sanitary facilities. Lieutenants and above have their own quarters. All crew members are allowed to combine their living quarters into one larger unit, should they so request. There are four extra-large suites spanning two decks that are reserved for the commanding officer, executive officer, and VIPs, which contain multiple bedrooms, an entertaining area, and a private study, all in the interest of giving senior officers on this very prestigious, stressful assignment adequate facilities to rest and recharge. All quarters aboard the Peacecraft are capable of being configured to meet any environmental need for a class M, L, K, O, or P, environment, with other configurations being possible with an additional life support module. Null-gravity and high-gravity configurations are also available.
Communal recreation spaces are plentiful on the Peacecraft. There are eight full-sized holodecks suited for parties of eight or more, and twenty-four smaller holosuites which are suited for two to four people, all with the highest levels of holographic fidelity available. Recreation decks are available in both the primary and secondary hull with a wide variety of games and other entertainments. Fitness facilities are also comprehensive, with recreational and conditioning spaces appropriate for all species serving aboard the ship. An expansive arboretum deck is found in the saucer, along with two public pools. Crew lounges ring the entirety of the saucer’s edge, with a large two-story lounge located on the centerline of the bow, connected to a wide promenade that allows crewmembers to take strolls where they can take in the views of the stars through the lounge windows and get in some exercise. Directly aft of the main lounge is a four-deck “mall,” which is connected to a number of restaurants, replicator facilities, and other similar facilities staffed by holographic attendants and/or civilians, depending on the particular ship.
Medical facilities are extensive, rivaling starbase hospitals. The medical deck on Deck 10 is split between two large sickbay units, with two surgical bays, four medical labs, office space for four physicians, four isolation rooms, and a fourteen-bed ward, as well as numerous individual patient rooms, dedicated medical storage bays, and industrial replication facilities. There are additional field sickbays located in other areas of the ship, as well as another large sickbay unit in the secondary hull. 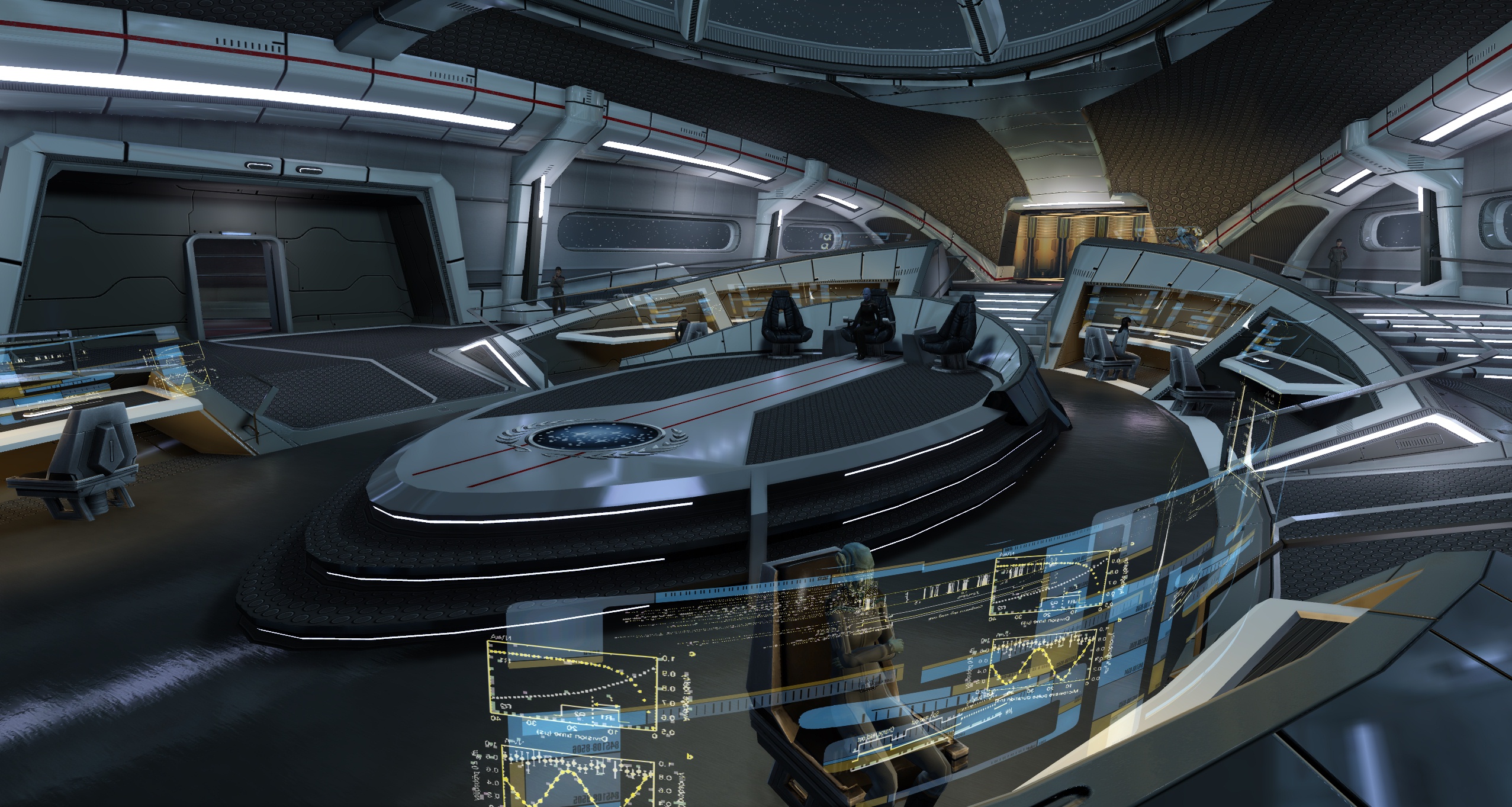 Equipped, like all other ships of its class, with guest quarters for up to four-hundred visitors on short notice (and a much higher overall capability to handle guests who do not require overnight accommodations), the Peacecraft is a very capable diplomatic starship, with a variety of conference spaces suitable for negotiations ranging in scale from first contacts, to inter-planetary disputes, to full-scale interstellar treaty summits.
Combined with her advanced communications system, the Peacecraft is capable of hosting negotiations in her holodecks with guests connecting remotely, and all of her diplomatic spaces and quarters are fully reconfigurable using holographic technology.

The Peacecraft’s first line of defense is her impressive shield coverage, with shield generators of comparable size and redundancy to a small starbase. She is also provided with comprehensive phaser coverage, with Type-XII arrays positioned to give full coverage along all arcs, including directly aft. Because of her dual warp cores, she is fully capable of using up to 75% of her arrays simultaneously, allowing her to defend against swarms of smaller ships effectively and to target multiple points on larger threat vessels. Torpedo coverage is provided by six burst-fire torpedo launchers, four in the forward quarter and two in the aft quarter.
This impressive set of tactical capabilities is further compounded by an equally impressive set of defense systems. These include advanced shielding systems which use multi-layered shielding technology, and three unified field emitter arrays.

Unlike earlier vessels, the Yorktown Class primary hull is equipped with warp coils in a horse-shoe around the ventral surface of the ship and its own warp core, allowing it to achieve speeds greater than Warp 8 routinely. In addition, this section has two impulse engines that are only revealed after the separation sequence has completed. This section contains the majority of the ship’s scientific and medical facilities, in addition to crew accommodation and recreation facilities, along with a very large hanger deck.
The ship’s secondary hull has a large upper section that serves as the command and control area of the vessel when it is separated, and which contains the forward torpedo bays and the ship’s main impulse engines. This area is connected to the main hull by twin catamaran-style interconnecting dorsals which reduce the ship’s mass while still providing structural support. The main deflector at the forward end of the secondary hull also includes many of the ship’s long-range sensor suites. The ship’s main warp nacelles are connected to the secondary hull with long, graceful pylons also containing the ship’s secondary impulse engines, giving the ship an elongated profile.
Compared to earlier vessels, there is more redundancy between the two hull sections, which allows them to operate more fully without one another–there are science labs in the secondary hull and engineering facilities in the primary hull, as an example.
One of the most complicated space vehicles ever developed by any species, the Peacecraft has two warp cores and sets of warp coils, six impulse drive assemblies, and four computer cores spread across two fully-independent hull sections, not to mention an embarked escort-class vessel. “Main Engineering” is still in its traditional place in the secondary hull, but there is another full engineering section in the saucer section, meaning that most Yorktown Class ships (like their Odyssey ‘cousins’) have at least two senior engineering officers who’d qualify as Chief Engineer on any other ship. Even with increased automation from earlier explorers, Odyssey still requires a large, highly-trained engineering complement.
Warp speed is very impressive for a ship of her size, with a maximum emergency speed of Warp 9.975 provided by the tried and tested Class-9 warp drive system first used aboard the Intrepid-class. With both sets of impulse engines active in the secondary hull, the ship’s maneuverability is very impressive for a ship of her size, but markedly inferior to her smaller cousins.

Origin & History of the Name in Starfleet History

The first U.S.S. Peacecraft was a Daedalus Class vessel, NCC-779, built in 2141 and that was kept into service for almost sixty years, when it was finally decommissioned. The name and registry number were subsequently re-used for one a Miranda Class starship, built in 2243 and kept into active service until 2290, when it went lost with all hands in unknown circumstances. A few decades later, in 2331, the next ship on the line was commissioned, as a Cheyenne Class unit, that would be kept into service for the great part of the century, surviving its involvement in both the Cardassian and the Dominion wars. When it was decommissioned a new Peacecraft, this time an Akira Class vessel with the new registry number 29334, was already under way for being launched in 2391. This time, differently from its predecessors, the ship lasted into service far less, being damaged beyond repair during one of the very first skirmishes of the conflict with the Klingons.
The name was given to honor the memory of Helena Peacecraft: still a young diplomat she was one of the key makers of the Armistice of San Francisco which marked the end of World War III in 2053. A staunch opposer to Colonel Green (her speech of 2058 against the genocide he was perpetrating at the time went all around the world, and made her the target of two failed assassination attempts) she later became Minister for Foreign Affairs, and finally President, of the European Hegemony from 2063 to 2078, a period in which she strongly supported the growing movement in favour of Earth unification which followed the First Contact with the Vulcans. 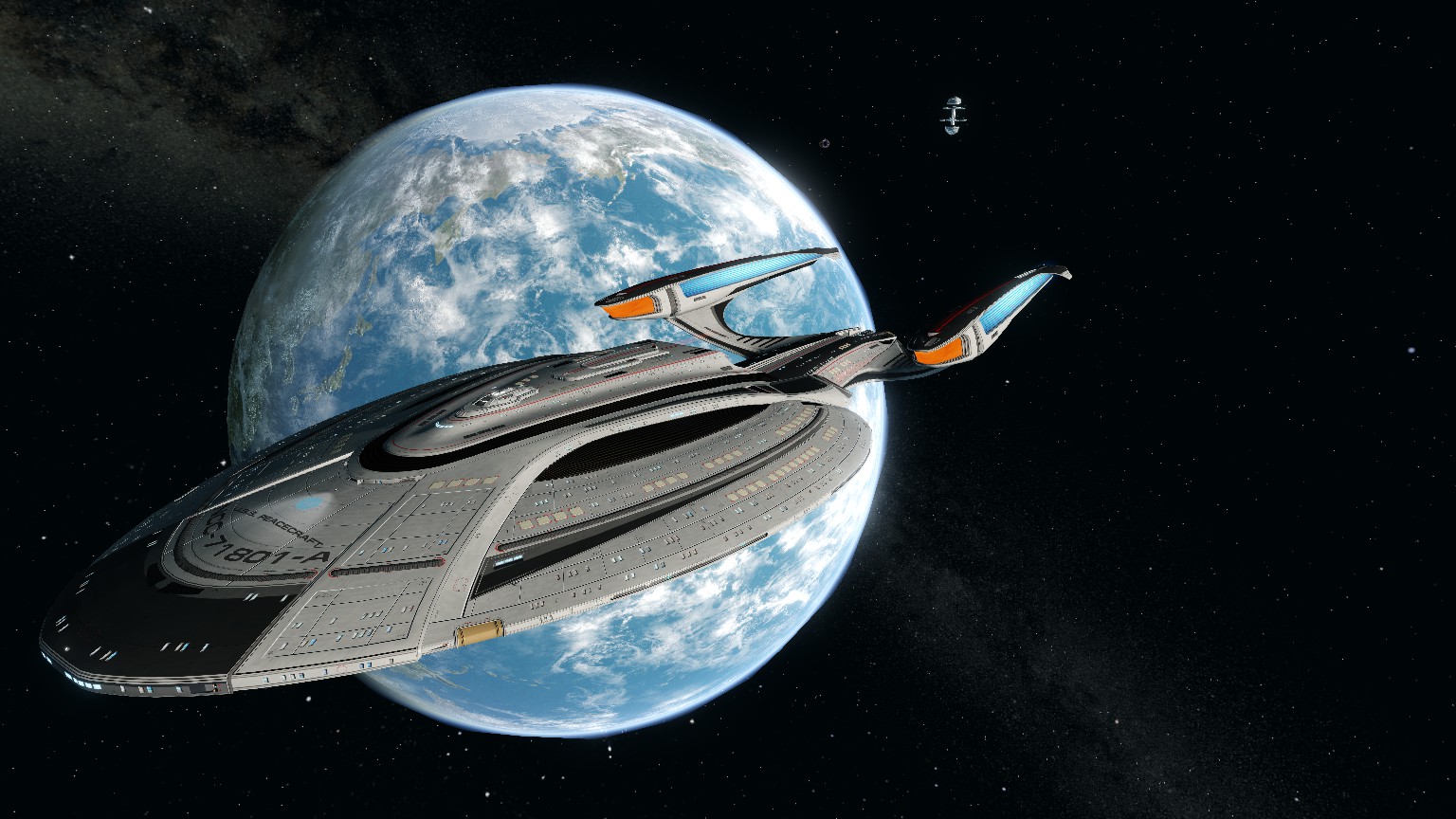 The Peacecraft cruising around Earth