Overview:
As the focus of the fleet shifts back towards exploration we have, upon request, taken a closer look at the subspace infrastructure in the Kelterre & Doza sectors. A number of recent missions have had to rely on traditional, non-subspace communications due to the lack of subspace relays in the area. As things stand, the current relays in the Betazed, Alderbaran, and Ba'aja sectors provide only limited coverage of the Kelterre and Doza sectors.

The science department is tasked with identifying the locations that will provide maximum coverage to ensure that future missions in this area are well within communication range. To that end we have utilized dozens of sensor logs from ships patrolling near those regions as well as passive and active sensor information from the Starbase itself to aid our search. Four systems have been selected to serve as primary relay sites, with an additional four selected to act as a contingency locations should the primary prove unsuitable, and/or as a means to further expansion into the as of yet uncharted Alpha 7190 and 7192 sectors. 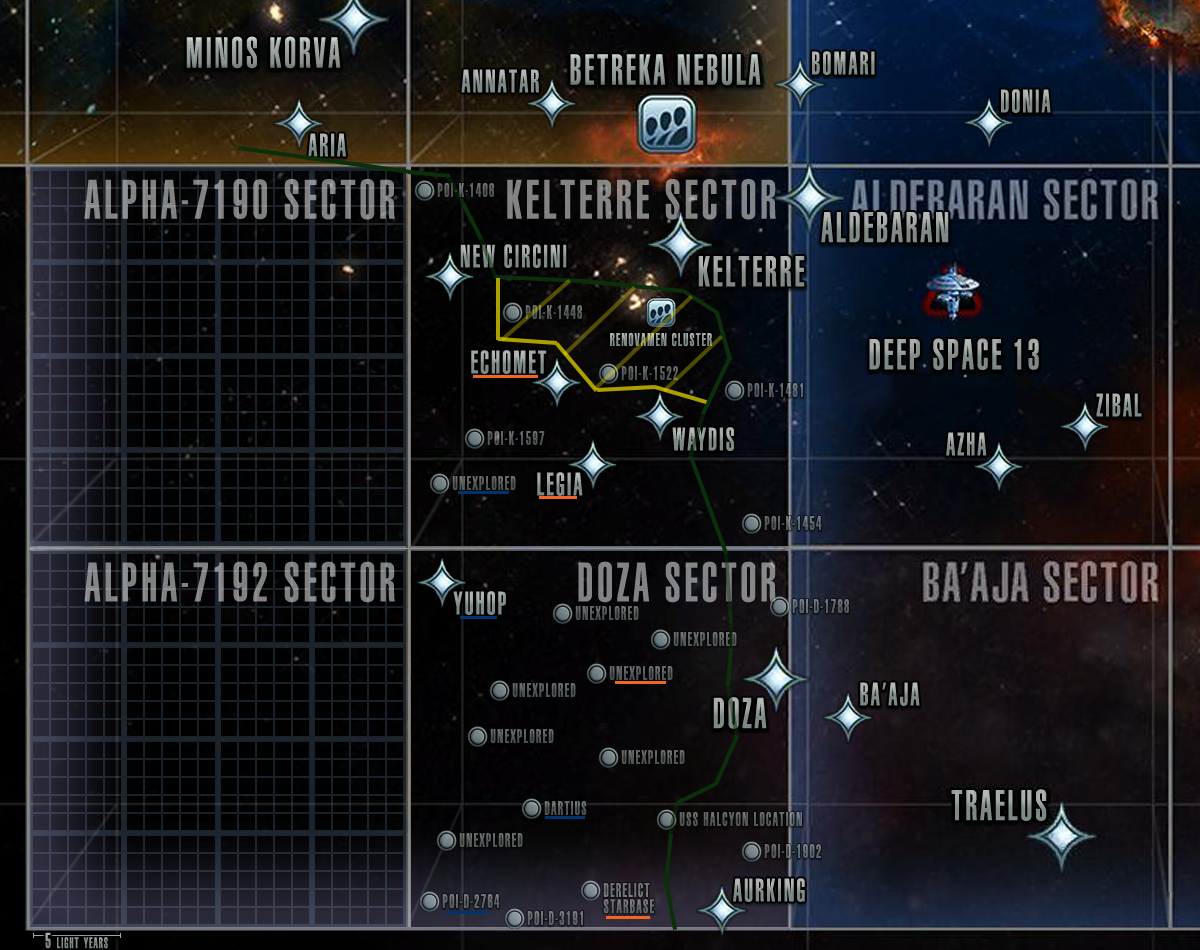 Primary Beacon Locations:
Echomet: The first location for a relay, the Echomet system has been chosen due to the large quantities of subspace radiation being emitted from the Renovamen Cluster. [see stellar radiation section for further details] In addition to the Renovamen Cluster, both POI-K-1448 and POI-K-1522 have displayed properties that inhibit subspace communication. The relay in the Echomet system will ensure that communications remain functioning beyond these inhibitors.

Legia: The second relay location, Legia, will push communications close to the border of Alpha-7190. We've deemed that the systems inhabitants, the Olelians, will be receptive to a relay in their space. They are eager to join the Federation and rapid, reliable communications will only smooth that process along.

Third Relay: A yet unexplored system selected for it's prime location. At almost the near center of the Doza sector a relay in this system, when coupled with the relay in the Legia system, would ensure almost sector wide coverage. It's our recommendation that an expedition to this system be mounted as soon as it is feasible.

Derelict Starbase: Located in the POI-D-2483 system this base was scouted by three Argo vessels roughly one week ago. The structure would serve as an ideal relay site, as well as a potential future outpost for exploration into Alpha-7192 and the yet unnamed sectors to the galactic south. The species encountered in system can likely be bought off should the need arise. Somewhat outside the scope of this report, we also recommend a more permanent research team be sent to exam the base further.


Secondary Beacon Locations:
Yuhop: The relay in this sector would require additional measures due to the early space age civilization inhabiting the M-class planet in the system, Atenalp. However, it would allow both observation and serve to bolster communications in the area.

Dartius: Once again, a relay in this system serves as a dual purpose device. A dual relay/sensor platform would allow additional data collection on the surface of the planet occupied by the Impluvium entity.

Third/Fourth Relays: These locations have been selected to serve as back-up locations should relays in any of the above systems suffer a failure. This will be the first steps to recreating the redundant networks found closer to the Federation core.

Stellar Radiation:
Renovamen Cluster: Likely the biggest obstacle to a communications network in the sector, the amount of stellar radiation put out by this star cluster renders communications via subspace practically impossible. Its location near the center of the sector blocks off a large portion of space as well as preventing messages from passing through the local area to relays positioned beyond.

At this time we don't see any way to mitigate the effect. The most likely solution is to simply build 'around' the cluster. We're able to ascertain that similar effects are exhibited by POI-K-1448 and POI-K-1522. With the lack of detailed scans of those systems we're not sure if they are emitting solar radiation on their own, or if they are simply within the range of Renovamen. Of note, any ships surveying this area will not have real time communications with Starfleet. In addition, the solar radiation has the potential to effect other ships systems as well. It's our recommendation that any ships attempting to survey areas surrounding the cluster undergo modifications to ensure no mishaps occur.

Please direct any questions or other inquires to the science department.
Report updated Stardate: 92623.2
10 Likes