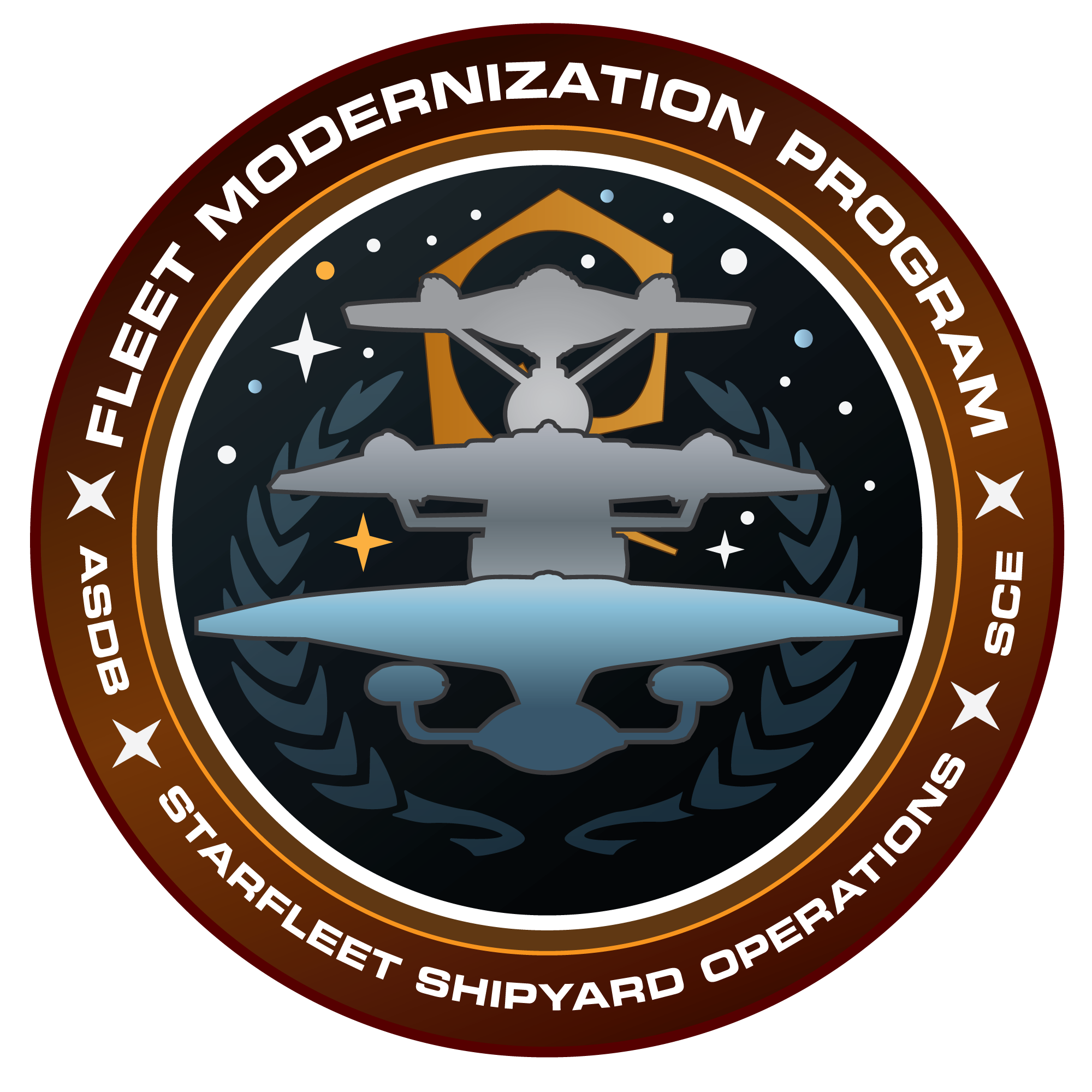 The Ananke orbiting Daruda III, during a diplomatic assignment to the Liyan Cluster.

The U.S.S. Ananke is an Excelsior Class (Type A Retrofit) vessel, serving as a multi-purpose cruiser.
Commissioned in 2344, the Ananke was one of the latest ships of her class to be built by Starfleet, originally as U.S.S. Stuart, with the registry number NCC-3455. In a period of peace, exploration was a key goal for Starfleet, and the Stuart was designed to perform mid and long-term exploration assignments through the use of the newest equipment available.
Her first commanding officer was Captain Godfried Keller, from 2344 to 2357. Under his command, the Stuart was deployed in numerous missions, always accomplishing them with merit. However, the introduction of the Galaxy Class in the late '50s soon downgraded the vessel to low-profile missions.
Keller was promoted to Commodore in 2357, leaving the ship to his first officer, Commander (then promoted to Captain) Vere Zh'otiarris, an Andorian. She commanded the Stuart from 2357 until 2370, when the Stuart was finally transferred to Earth Spacedock, as a training vessel.
In 2373, the beginning of a full-scale war with the Dominion led Starfleet to re-assign the Stuart to frontline duties: under the command of Captain Roger Tredmore, the ship bravely fought in many skirmishes against Jem'Hadar incursions. In 2375 the ship took part at the Second Battle of Chin'Toka: during the battle, the Stuart was badly damaged, and lost more than half of her crew; Captain Tredmore died during the battle.
The ship proved to be recoverable, however she had to spend the last part of the war in drydock.
With the end of the war, Starfleet was in no need for an old ship like the Stuart, so she was used once again as training vessel for Starfleet cadets, but only for few years (2376-2379). Mothballed in 2380, the Stuart was once again called into service only after the outbreak of the Federation-Klingon War in 2405,with a new name and a new registry number: U.S.S. Shenandoah, NCC-56770. Her main duties at first involved the transport of troops and supplies to the frontline and the protection of low-risk trade routes from Orion raiders attacks.
The chair of command was assigned, during this time, to a young (yet proven) officer: Captain Yara Tredmore was the niece of the same Roger Tredmore who lost his life commanding the then-Stuart. The coincidence didn't not deter Yara from accepting the new command: in fact, grown in a family of Starfleet officers, under the shadow of the memories of her heroic grand-father, Yara was determined to prove herself worth of such a legacy. Fighting to counter Borg incursions inside Federation territory, and against the Iconians, the Shenandoah and her captain gained many merits from Starfleet.
Ironically, Yara Tredmore met the same fate of her ancestor: in 2413, the Shenandoah fought in a terrible rearguard battle after the massive defeat suffered by Starfleet and its allied at the Dyson Sphere. The ship was almost destroyed, with only fourty-five survivors (saved in their escape pods by the U.S.S. Garenciers): with almost all bridge officers dead, Captain Tredmore stayed behind in order to cover the escape of her crew. She was not seen again. Few weeks later, the wreckage of the Shenandoah, drifting in space, was found by the U.S.S. Barrows. Starfleet was in terrible need for ships to fight the Iconians, so Starfleet Corps of Engineers was tasked once again with the unenviable task of making the ship ready for duty.
In 2414 the Shenandoah was still docked at Earth Spacedock, when she was assigned to Captain Andrej Timoreev, recently promoted to the rank. He personally oversaw the last steps of the repairs: with the war finally coming to an end, Starfleet had time to refit the old lady. She was thus fully upgraded with the latest technology available from the recently inaugurated Resolute Class, under the aegis of the Starship Modernization Program: the only thing left untouched was the exterior appearance, but inside, she was a whole new ship (in the limits of what was possible). This fact led also to the decision of changing once again name and registry number of the ship: U.S.S. Ananke, NCC-94123.
At the beginning of 2415, after few exploration assignments, Captain Timoreev and the Ananke were finally assigned to the 38th Fleet, Aries Squadron.

Immediately after her arrival at Deep Space 13, homebase of the 38th Fleet, the Ananke was dispatched in a series of patrols in the surrounding systems. During one of them, the ship encountered a mysterious ancient drone, apparently disabled. Taken on board for further study, the drone reactivated itself and tried to escape, only to explode for overheating (All Along the Way).
Few weeks after the episode, the Ananke was chosen as flagship, leading one of the first Starfleet expeditions in the unknown areas of space of the Doza Sector, made up by the U.S.S. Asimov and the U.S.S. Rebellion. The destination was what appeared a wrecked structure in D-2483. The situation became critical when the expedition met local scavengers who claimed the ownership of the structure: any attempt to reach a compromise failed, and the vessels were forced to withdraw (Exploration mission of D-2483).
In stardate 92723.2, the Ananke was dispatched for a joint exploration mission with the U.S.S. Endeavour to K-1406, an uncharted binary system in the Kelterre sector. Once in the system, the two ships discovered that a wormhole was opening in the area, and the Ananke was left patrolling the edge of the system while the Endeavour moved forward to investigate. It was later discovered that it was a Barzan wormhole, whose exit disappeared soon after. The Endeavour remained in the system, while the Ananke came back at DS13 (Exploration of K-1406). In stardate 92742.2, the Ananke was part of a Starfleet rescue mission led by the U.S.S. Hyperion, together with the U.S.S. Tyre, U.S.S. Kaguya, and U.S.S. Rebellion: their objective was to rescue a civilian freighter attacked by what appeared to be Orion ships. Although the freighter lost most of its crew, the raiders were destroyed. The Ananke particularly engaged their carrier in the frontline, sustaining minor damages (Raider Trouble).
After a period of patrol duty in the nearby systems, the Ananke was tasked with a deep space charting mission in the Doza Sector. The exploration of the uncharted region proceeded fairly well, until the vessel encountered a gravitational anomaly, later revealed to be some sort of vehicle or sentient being, in stardate 92834.6. The Ananke was trapped inside the anomaly, sustaining heavy damages and losing fifteen crewmembers, while the rest of the crew suffered from a sort of mass telepathic experience (Cosmonauts, Part IV-V). The ship and her crew were rescued almost two weeks later, by a task force made up of the U.S.S. Medici, U.S.S. Beagle, and U.S.S. Tyre, which towed the vessel back to DS13, where it underwent major repairs (Cosmonauts: Rescue Mission).
Back on duty few weeks later, the Ananke, now reassigned to the Taurus Squadron, participated to a survey mission in the Waydis system. In particular, the crew was involved in surveying the southern hemisphere of Waydis II (Waydis II). In stardate 93011, with the whole Taurus Squadron now assigned near the Federation-Klingon border, the Ananke was tasked with a patrol mission at the outskirts of the Liyan Cluster, in the Donatu Sector. The vessel and its crew were subsequently involved in diplomatic contacts with the powers of the cluster after the hacking of a Federation satellite (AAR: Liyan Cluster).
Subsequently moved to the Libra Squadron, the Ananke now serves as squadron flagship.

Note:
The motto of the Stuart/Shenandoah originally was "Animus in consulendo liber" (Free spirit to decide), a phrase of Cato the Elder. Captain Yara Tredmore was a passionate amateur scholar of Earth classical works, and particularly of ancient Greek poetry and literature. During her last battle, the sole bridge officer who survived (then-lieutenant Tlaive Escott, who later became Chief Medical Officer under Captain Timoreev), while leaving the bridge heard Tredmore saying that "even the gods don't fight Ananke." During a period of recovery down on Earth, while the ship was in drydock, Lieutenant Escott decided to investigate about that weird phrase: he thus discovered that it was by a Greek poet, Simonides of Ceos and that she was referring to the Greek goddess of Necessity (Ananke). Fascinated by the meaning of that phrase, and in memory of his lost captain and friend, Escott proposed to change the name of the vessel accordingly, with the new motto as well. The proposal was accepted by Starfleet, with the later consent of Captain Timoreev. 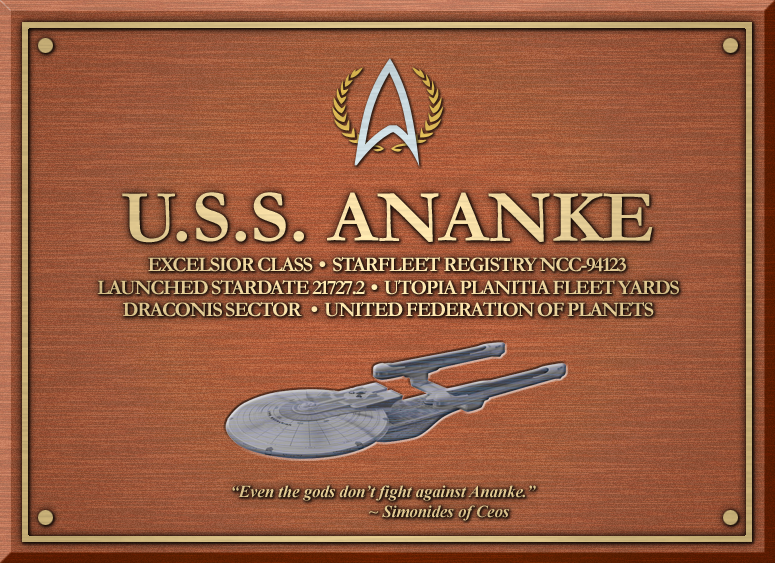