The practice seems to have originated with the civilian population of DS13, but has since spread to include some members of the fleet itself.

I continued running my security staff through readiness drills throughout the ship yesterday. We’ve got boarding party response times down to acceptable levels, though refugee evacuation drills remain a concern.

Yesterday evening was mostly uneventful. Vincennes spent most of the day in orbit around Talos Station. Some kind of fleet-wide briefing Captain Meadows had to attend. Afterwards, she attended an informal ‘Klingon Remembrance’ event. Must remember to ask Lt. L’naan about that - I didn’t think the Klingons had it in them.

Curiously, at around 2330hrs, third shift’s on-duty security officer, Lt. Hirhut, recorded receiving an emergency broadcast from the surface; the captain requested an urgent site-to-site transport from the surface directly to her quarters.

No explanation was given, and she later asked that I not record the incident in my formal security log “as a personal favour” and that it was “nothing”.

I remember the captain once saying she didn’t drink. It’s also a matter of record that Klingons love their bloodwine.

The Klingon Raptor Qul Cha’bIp hovers in orbit over Yuhop. The crew reacting to seeing Talos Junction for the first time.

Commander V’ecna “THAT is their Foward Military Outpost?!”

Lt. Thra’ssk “Thats not a Beachhead, thats a Beach House…”

There is a noticeable chortle of laughter on the bridge as the comms station trills.

Yet again there is muffled snorts as the Captain raises his hand to silence everyone.

Captain Roh’Khan trying to hold his composure “Decloak, and open the damn channel…”

Captain Roh’Khan “I am Captain Roh’Khan of the Qul Cha’bIp; Member of Task Force Hurq Mevik. General Cynis can vouch for our presence here. We are looking to help you shatter your Mirror!”

There is a brief pause on the comms, Kronq begins to lightly humm a Risan tune which breaks out in another wave of laughter on the bridge. V’ecna, who was also laughing could see the unamused look on her captains face, and shoots a dirty look to Thra’ssk. The Gorn Security Chief catches the glance, suppresses his laughter and hurls a metal chunk at the Pilot. The piece misses its mark, but the message was well received as everyone stifles their smirks just intime for Starfleet to come back online.

Starfleet Security Officer “Quail Cha Blip, you are clear for docking, welcome to Talos Junction Outpost! Feel free to beam down, there is a relaxation gathering scheduled for 2100 hours on the beach with food, music, and drinks!”

The channel is cut, and the bridge is silent for a moment, everyone looking to their captain, who can hold it in no longer, and simply buries his ridges in the palm of his hand; defeated. The bridge erupts with laugher once more as Roh’Khan wonders how his General is managing through this mess.

Rumor has it that somebody broke Commander Burov’s nose.

Rumor has it Commander Tyrstoc broke Burov’s nose. With a headbutt.

It is also rumored that the notoriously tempestuous Rigelian has become increasingly withdrawn over the course of the Terran War. Further punctuating this mystique, a story has circulated that the Commander was uncharacteristically not seen, heard from, nor logged anywhere at all for the entire duration of a Klingon remembrance ceremony held several days ago. Moytura crewmen are largely tight-lipped about the details out of loyalty their captain seems to engender by intense reciprocal dedication and genuine personal camaraderie. However, there are whispers of the Commander drinking himself into a sequestered stupor—alone—deep enough that the Moytura’s XO served out the captain’s full duties the entire next day…

Rumor has it that after a very shaky introduction into the Federation’s War, the Crew of the IKS Qul Cha’bIp has withdrawn to their ship to go over all tactical data up until this point to best formulate the approach they need to succeed in this war. 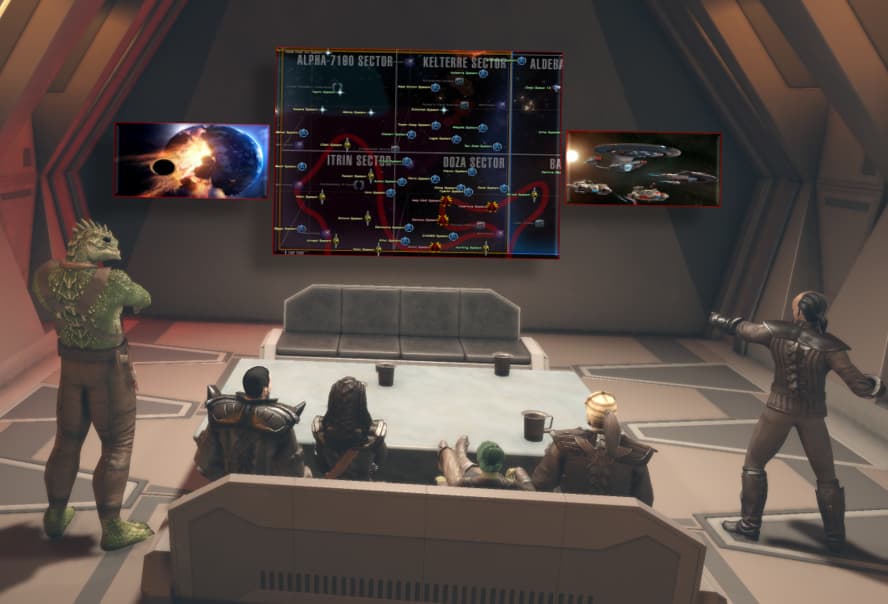 CUE UP THE ADELE, 'CAUSE RUMOR HAS IT…

…that Captain Mi’shune sh’Nimitz, Captain of the USS Baton Rouge, is back on Magellan Station, recovering from her injuries sustained during the Citali System Fustercluck. She requires extensive regeneration after losing two limbs, which can only be made available at a Starbase.

Also, she can taste sounds, hear pictures, and see music.

It may not even be related to all the drugs she’s on right now.

Rumor has it, the First officer V’ecna of the Klingon ship Qul Cha’bIp visited Captain Mi’shune in the hospital and brought her bloodwine. Following the exchange, a shipment of fresh authentic Klingon Raktajino was delivered to the station, addressed specifically to the recovering captain. 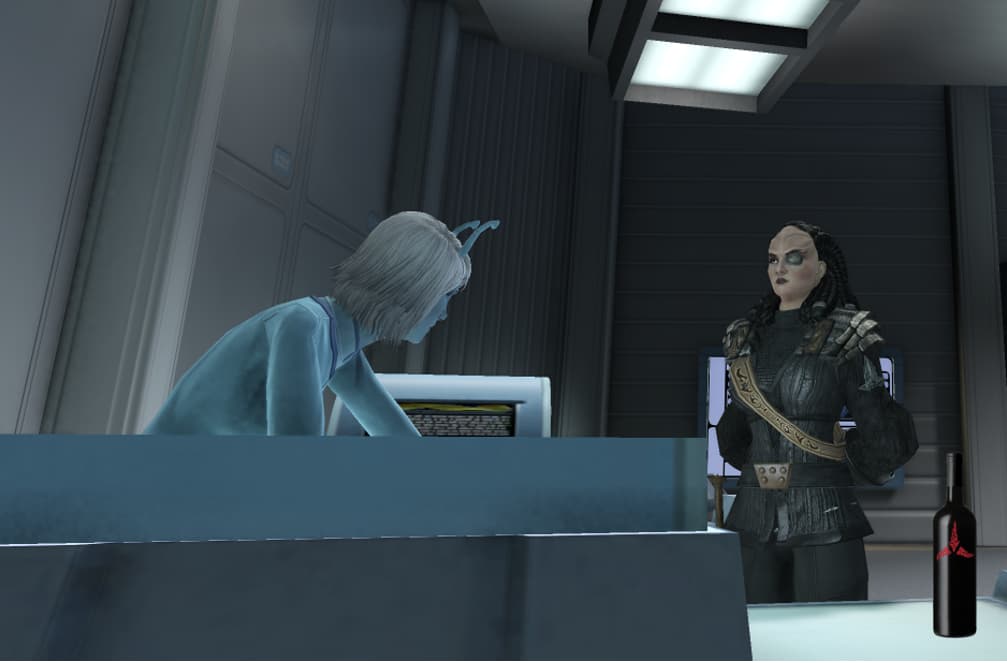 Certain bridge officers aboard USS Dragon have reported hearing a certain song coming from the Captain’s Ready Room at moderately loud volume, faintly audible when passing by the door, en route from [Redacted] to [Redacted]. They probably wonder why the Captain can’t listen to the Chu Chu dance like everyone else, but have to admit, it kinda gets the blood pumping. 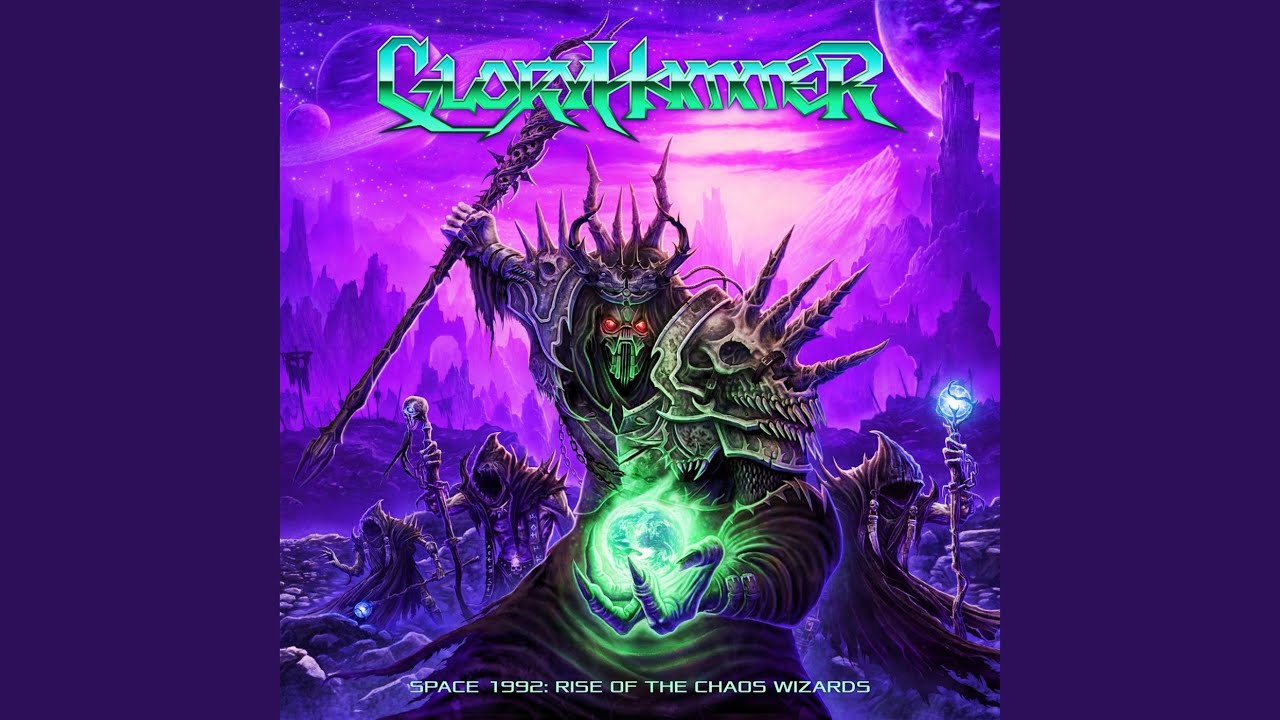 Rumour has it that Major Valencia posted a poll on her socials about which would last longer, a tulaberry or the ISS Truss.

The tulaberry is still going.